New Crimestoppers £5,000 reward to find car connected to the murder of Tomasz Waga in Cardiff 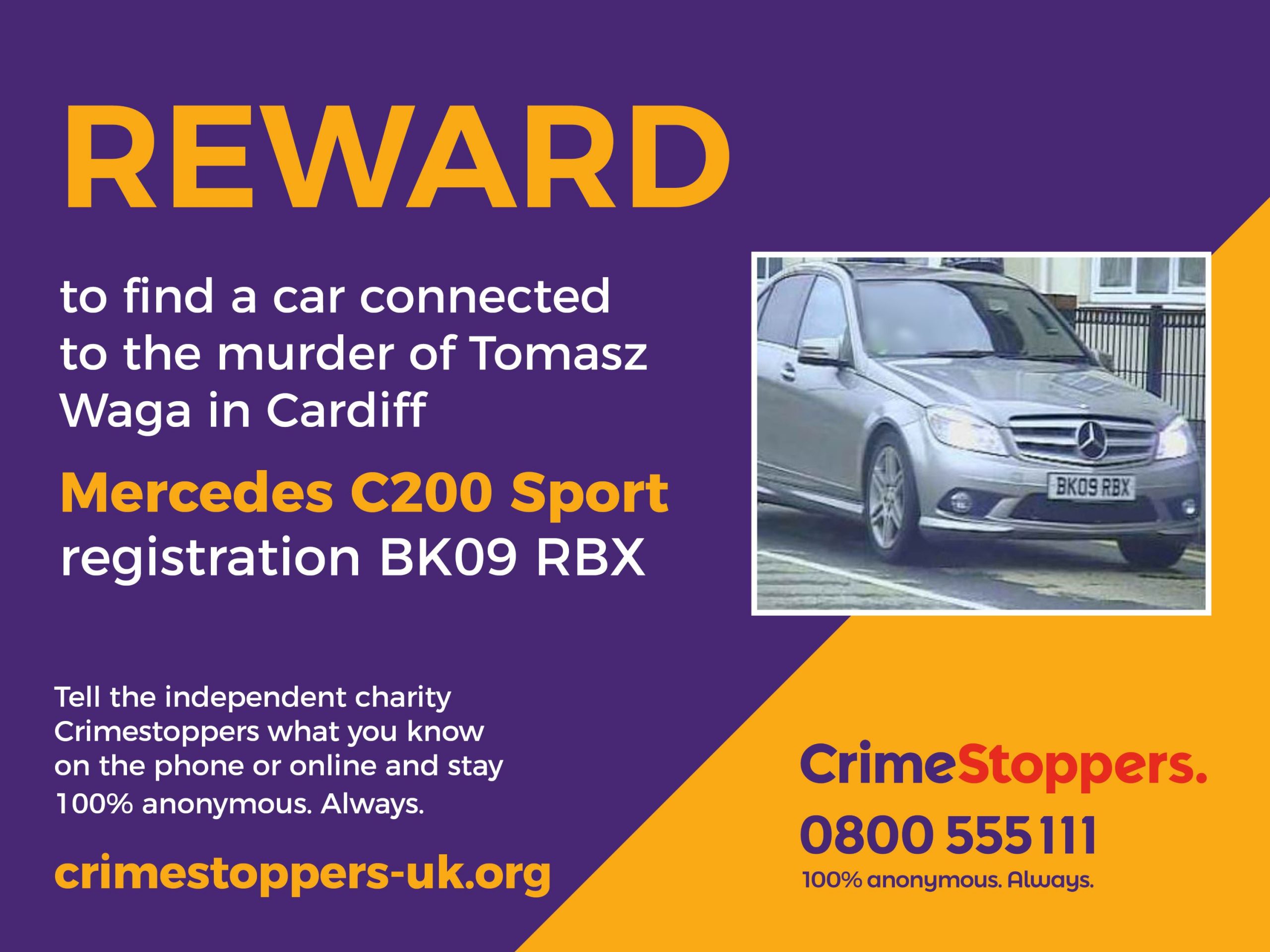 The independent charity Crimestoppers has launched an appeal for anonymous information to urgently recover a car that may be linked to the murder of Tomasz Waga.

23-year-old Tomasz’ body was found by a member of the public in Westville Road, Penylan, late on Thursday, 28 January. It is believed that he travelled from Dagenham, east London to Newport Road in Cardiff, where a disturbance took place an hour before he was found. He died as a result of a sustained assault.

A number of vehicles have already been seized as part of the investigation into Tomasz’ murder. Attention is now focused on finding a silver/grey Mercedes C200 Sport, registration BK09 RBX, which is linked to three male suspects, seen in Cardiff on the day of the murder.

The Mercedes has not been seen since and it could contain evidence, linked to Josif Nushi (aged 26), Mihal Dhana (aged 27) and Gledis Mehalla (aged 19), all suspects wanted for questioning over the murder. Our three £5,000 rewards remain in place for information on their whereabouts.

The three wanted men have links with Lushnje in Albania, Bradford and Huddersfield, north west London and Bristol.

It is thought the suspects, who are involved in the production of cannabis, fled Cardiff the day after the murder.

***To support police with their investigation, Crimestoppers is offering an additional reward of up to £5,000, available to anyone providing information that leads to the recovery of the Mercedes being sought in connection with the murder of Tomasz Waga***

***Information must be given exclusively to Crimestoppers either online at Crimestoppers-uk.org or by calling freephone 0800 555 111 to be eligible for the reward ***

Mick Duthie, Director of Operations at the charity Crimestoppers, said:
“We know that Tomasz was a much-loved father, partner to his girlfriend, son and brother and we urge anyone with information to come forward and speak to our charity 100% anonymously.

“If you have any knowledge about the silver Mercedes C200, captured on CCTV in the Cathays area of Cardiff on 28 January, please talk to our charity. We know that a previous registered owner from the Fairwater area of Cardiff is not connected to this investigation. It is also possible that the car has been sold, has a different number plate or is burnt out somewhere.

“Our charity is here for people who feel unable to speak to police directly. We are independent and offer an alternative option when reporting crime. Since 1988, when Crimestoppers began, we have always kept our promise of anonymity to the millions who have trusted us with their crime information.

“I urge you to do the right thing. You can call our UK Contact Centre, which is open 24/7, on freephone 0800 555 111 or you can use our simple and secure anonymous online form at  www.crimestoppers-uk.org. Nobody will know you contacted us and you’ll be doing the right thing for Tomasz, his family and his friends, who  deserve to see those responsible for Tomasz’ death brought to justice.”

Please note: Computer IP addresses are never traced and no-one will ever know you contacted us. For telephone calls, we have no caller line display, no 1471 facility and have never traced a call.