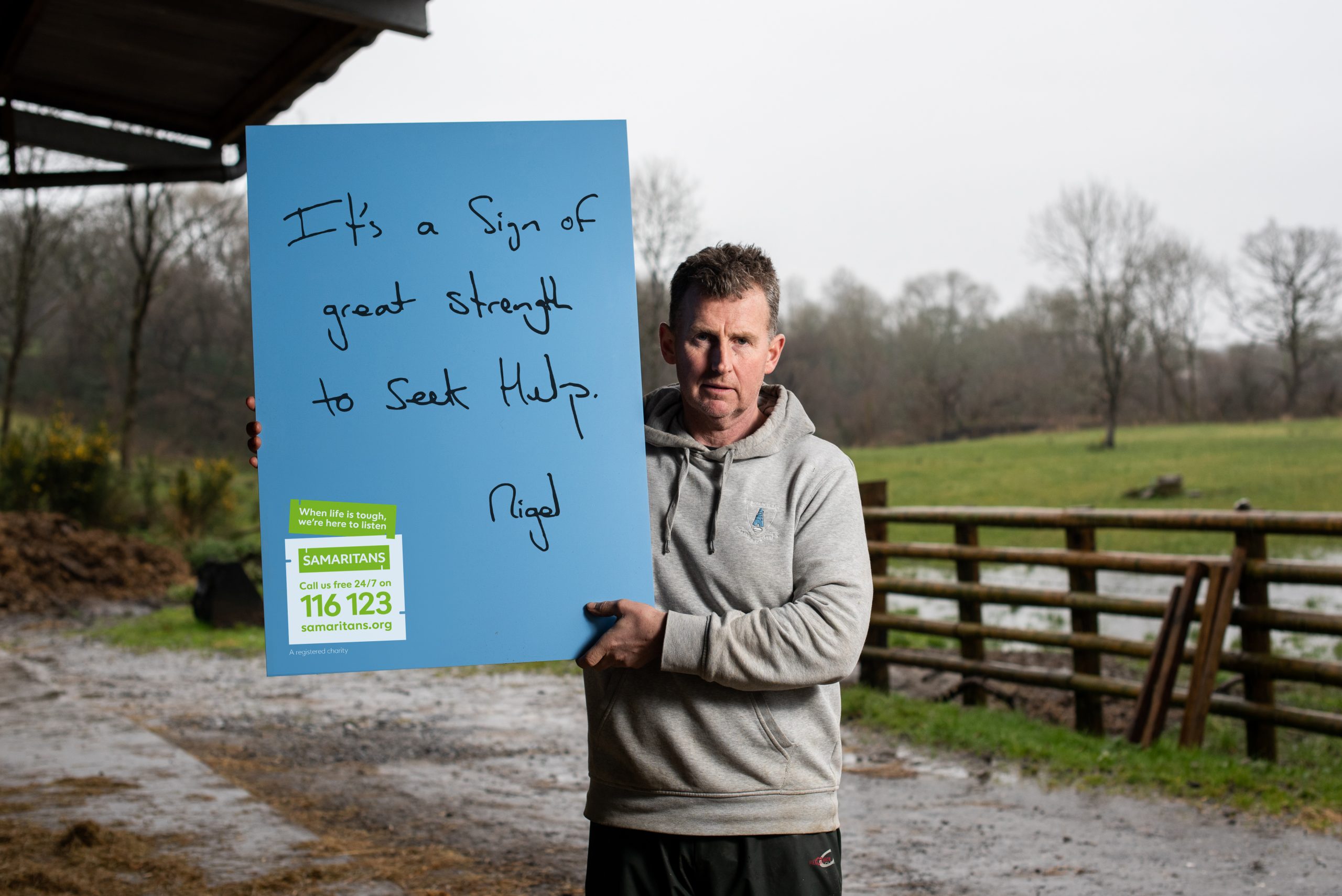 A new UK Samaritans survey has discovered that men in rural areas (43%) are less likely than men in urban areas (51%) to reach out for support or talk to someone if they are struggling with their mental health.  Women living in rural areas are much more likely than men to seek help with 60%, saying they would talk to someone if they were struggling.[1]

The findings come as Samaritans Cymru launches a new phase of its Real People, Real Stories campaign, with the support of Nigel Owens, which aims to reach men in rural communities in Wales who are struggling to cope to prevent them reaching crisis point.  Based on the latest suicide statistics for Wales, men are 3.9x times more likely to die by suicide than women. Additionally, men aged 45-54 have the highest suicide rate.[2]

Two thirds of men living in rural areas (66%) also said there are a variety of factors that would stop them reaching out for support even if they were struggling. Samaritans discovered the top three barriers are stigma around mental health (18%), not knowing who to turn to (15%) and lack of awareness of support available (15%).1

“A lot of men in particular feel it difficult to speak to somebody that they know because they are afraid or think they’re showing weakness, which I don’t think you are. That’s why Samaritans is very helpful, because you can ring up and speak to somebody and you don’t know who they are or where they come from. And you can have a conversation about what is worrying you. And they’re very good at listening.

“Sometimes, it’s just the fact that somebody is listening, they aren’t judging you and you’re able to unburden those worries. A conversation like that with Samaritans can help somebody immensely. It was an easy choice for me to support such a great campaign like Real People, Real Stories.”

For the campaign, Samaritans Cymru are raising awareness of their helpline right across Wales. All rural local authorities will have the Samaritans English and Welsh helpline number advertised on petrol pumps this month and S4C will be running an advert to encourage men to reach out for support. Radio adverts will also be broadcast, along with posters displaying handwritten messages from men who have struggled in the past.

“Samaritans Cymru exist to reduce the number of people who die by suicide. Suicide is a major public health issue but also a major inequality issue. We are here for anyone struggling to cope, no matter who you are or where you are. Mental health challenges and suicide are complex, going beyond where you live or your profession, but these can be . In Wales, the increased risk for those living in rural and agricultural settings due to poor access to services, isolation and persistent loneliness mean it’s essential   we do more to reach these individuals and communities. We’re thrilled to have Nigel’s support and we hope this new Real People, Real Stories campaign will raise awareness of the support that’s out there and most importantly, let men in rural communities know there’s always help available”

“I think in general men find it difficult to open up because of that macho image. I suppose in certain industries like the macho world of rugby, in the rural agricultural community, and certain other industries as well, there is that image of the man of the house where you feel that you can’t show your feelings, you can’t share those burdens and those worries. And that’s why a lot of men in particular bottle it up because they feel that they are the strong person in the house and they can’t show a sign of weakness when actually it’s not a sign of weakness. It’s actually is a sign of great strength to open up about those troubles. That takes a lot of courage.

As we mark two years that have been challenging for everyone since the start of the Coronavirus pandemic in Wales,  it’s vital to encourage men in rural communities finding life tough to seek help by calling Samaritans for free 24/7 on 116 123 or in Welsh on 0808 164 0123 (Open every day 7pm-11pm). They can also access support by visiting samaritans.org for online self-help tools and information.

You can find out more about the Real People, Real Stories campaign here.

[1] (Opinium Research, national omnibus survey of 2000 people over 18 across the UK with statistically robust number in rural and urban areas, carried out 17th – 21st January 2022).