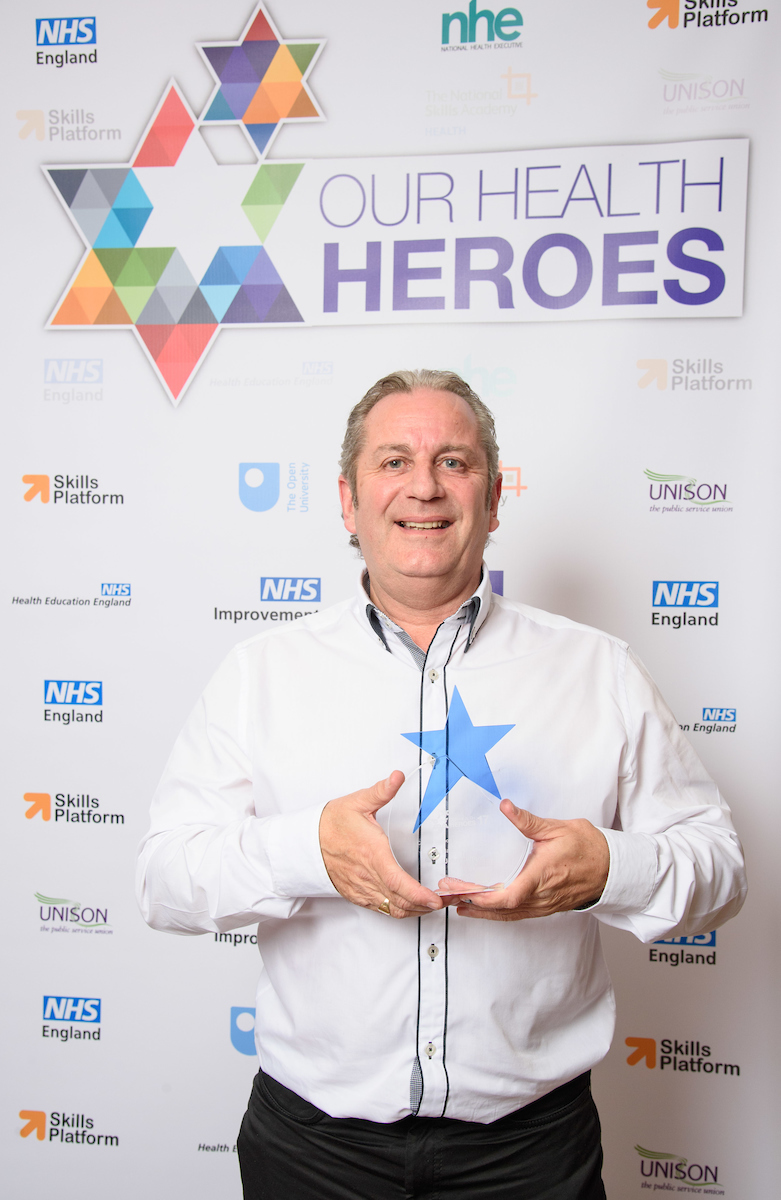 A mother whose son receives care from Our Health Heroes 2017 winner John Clifford has called for members of the public and those working within the healthcare sector to nominate the people who are making a real difference to the lives of patients across the UK.

Organised by Skills for Health and the National Skills Academy for Health, Our Health Heroes is a national healthcare awards scheme which recognises individuals, teams and employers from within the healthcare sector who are going the extra mile for their patients, colleagues and staff.

Cerianne Kieft, whose son Hari was diagnosed with cerebral palsy at 18 months old, says that John Clifford, a physiotherapy technical instructor from Neath Port Talbot Hospital who has been supporting her son since his diagnosis, is a hero in her eyes.

She said: “As parents we want the best [healthcare] for our children and that’s what we get in John. His passion, enthusiasm and willingness to try anything that works for our son is inspirational.

“John looks at the abilities of the child, not just their disabilities, and he’s willing to try anything so that they succeed. He was there when Hari took his first steps and when he learned to jump, and he taught him how to ride a bike.

“John is a very important person in our family because even though Hari was diagnosed with cerebral palsy, often a diagnosis affects the whole family.”

The deadline for nominations has been extended to midnight on Sunday 23rd September and Cerianne is urging people to celebrate those who are making a real difference in healthcare facilities across the UK.

The categories for this year’s awards are:

Cerianne added: “We’re really proud of John but there are many more heroes across the board and we hope they will, in time, get recognition too.”

Care and healthcare staff from across the UK can be nominated by line managers and colleagues via the Skills for Health website. Applications for the Lifetime Achievement Award are open for public nomination too.

Entrants will be shortlisted and regional winners and finalists will be chosen either by public vote or by an expert panel, before the winners are announced at the awards ceremony later this year.

John Rogers, Chief Executive of Skills for Health, said: “There are thousands of unsung heroes in our NHS without whom our healthcare system would grind to a halt.

“These dedicated staff work hard to keep the NHS running, and the excellent patient care that we all expect from our health service would not be possible without their commitment and passion.

“I am very proud that Skills for Health, the National Skills Academy for Health and our sponsors are shining a light on their contribution and I look forward to celebrating these amazing people at our awards ceremony in November.”

The deadline for nominations is midnight on Sunday 23rd September and the awards ceremony will take place on Friday 23rd November 2018 at London’s OXO Tower. To make a nomination visit www.skillsforhealth.org.uk/ohh-2018