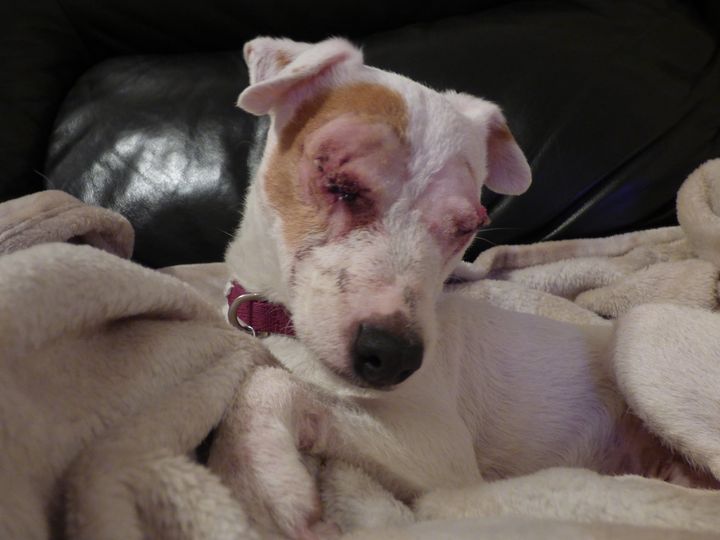 Hope Rescue has seen a significant increase of surrendered dogs since the firebreak lockdown ended in Wales. The reasons for giving up a pet are varied and it is a difficult but responsible decision for the families involved in handing their pets over. Not only has there been a 100% increase in surrenders at this point in the year compared to 2019, the dogs that are entering the centres care are arriving with chronic untreated illnesses as the full financial impact of Covid19 hits families hard. The increase in dogs needing medical treatment has laid heavy on the charities vet bill expenditure.

Examples of chronic illness include extreme skin and ear conditions requiring ongoing treatment and dogs entering the centre with severe damage to their eyes and vision, which is often irreparable and very painful for the animal. Last year the rescue centre had to send just one dog to the vets to have their eye removed, which is the last resort when pain is unmanageable, and the condition can’t be treated. However, in the last two weeks there has been three dogs needing to have eye removal surgery, including Penny a 2-year-old Jack Russel who has undergone double removal and losing both eyes. The lenses in both of Penny’s eyes had luxated – which meant they had moved from the position they should be in. The only option to relieve the pain was to remove both of her eyes. As she already had no sight, hopefully she will cope well after the operation as she now recovers in one of the dedicated foster homes.

With the increase in dogs with complex medical needs, vet bills are currently £13,000 every single month. The charity has suffered financially as a result of Storm Dennis closing the charity shop in February and COVID grinding boarding kennels and community and events fundraising to a halt at a loss of £1,000 every single day. This increase in dogs who need  help will have a huge impact on the charities finances for some time to come. Whilst zoos and aquariums received funding, sadly the U.K. government has not awarded any dedicated emergency funding for animal welfare charities.

Sara Rosser, Head of Welfare at Hope said, “In the last two weeks we have had three lovely dogs who have needed this surgery. As well as Penny, we have had Cobweb, a French Bulldog who came to us as a stray and Alf, a German Shepherd who was surrendered to us by his owners due to a change in circumstances. Both had painful, untreated glaucoma and both dogs have had to have one of their eyes removed. They are recovering in foster homes before going up for adoption.

Currently we are seeing an unprecedented number of dogs surrendered to us with a chronic, untreated medical condition.  We believe this increase may be due to many owners struggling financially in the current climate but we are also taking in dogs where they have only been with the owner for a couple of days or weeks. The demand for dogs is so high at the moment that they are being purchased privately without the new owners being aware of the dog’s needs or being prepared for the financial responsibility that comes with dog ownership. We are grateful that owners are asking for help rather than abandoning their dogs as we often see. But his comes at a cost and the increased demand for our services has put a huge amount of pressure on us as a charity. However, our doors have remained open throughout the pandemic and we are dedicated to continuing to provide a place of safety for the most vulnerable dogs in our local community.”

If you are in a position to donate to support the charities work then please get in touch; phone 01443 226659 online www.hoperescue.org.uk or by Text HOPERESCUE to 70085 to donate £10