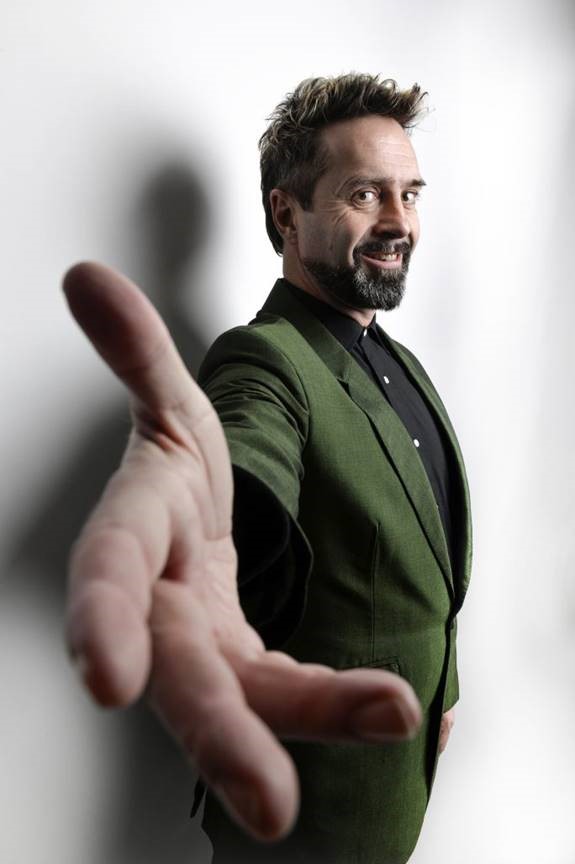 What do you want the audience to take from your show?

Well, first and foremost it’s a comedy show so I want the audience to have a good laugh and I want them to go away feeling uplifted having had a good night but, I’ve been working for the last 13 years or so writing these longer-form narrative shows which are theatrical, and they have a light philosophy running through it. I talk about stuff that’s a little bit deeper than say just simple observations like dropping your phone or whatever; it’s just about how my brain works and how faith works. We are living in an age where there is a lot of confusion from the likes of the internet where there is a lot of arguing and misunderstanding, and fear of other beliefs and everything, so it’s just me trying to get with grips with that reality. Ideally, it’s just a stand-up comedy show, it’s just a hilarious show, but it revolves around the story that my family are devout Christian’s in this crazy Christian sect called The Brethren Assembly. It’s about me leaving home at 17 and realising that there is a whole big world out there, and then me coming into conflict with them when my brother Andrew had a car accident. So it’s based on a true story, but I can’t tell you what happens as I don’t want to give the story away.

So is it all based on fact, or have you added a bit of artistic freedom to the storyline?

Yes, it’s all true. It is so unbelievable that as my life is so colourful that I’ve only been a stand-up comedian my whole life (laughs), but a thing about my nature is that I don’t know where the limits are, and I think I say that in the show, because I was raised in such a cloistered way that the boundaries were so strict. When I got free of it, I just thought that this world is incredible, an amazing, beautiful big world, so I take life by the throat, and it means I’ve gotten myself in some precarious predicaments! I then express them to the audience for the sake of laughter. They are all true stories, but after every single show I have people come up to me and say “That’s not all true is it?” and I tell them that it is absolute ‘all true’, I just changed the names of the innocent to protect the innocent, and I may paraphrase the odd thing that was said for humour sake. All the stories and incidents are absolutely 100% true.

Being brought up a Christian but when your brother had his accident it made your question all that religious believing, how did your family take all that and was it a while before you were talking again, or did it not affect things?

In the story, I’ve moved away as I want to go away and study acting as I want to be a performer, and my parents are dead set against that. It was my brother Andrew that inspires me to go and do it anyway, so I run away from home really at 17, even though my two older brothers are still living there! (Laughs) They are 30-year-old virgins! A couple of years into that journey of self-discovery an incident happens, and it brings me at loggerheads with my parents, and to be honest I’ve spent years not being able to speak properly to them, I’m still a good son, and they are lovely, lovely people. I could go home at Christmas, and I would go back at Easter, it wasn’t like there was any angst, but I just avoided going there. I was also discovering the world and meeting girls, just living the life of a minor comedy rockstar going around the world and partying and everything. It wasn’t something that I wanted to share with them or could share with them. I talk about it in the show in that they do know what I do, and they know I talk about them in the show, I talk about a lovely incident where I did get naked on the TV in the show called The Weakest Link with Anne Robinson because I had done a show in Edinburgh that year called The Naked Racist, and at the end of that show I get naked. She was making fun of me by saying “You can’t be funny if you’re not naked”, so when I got voted off, I took off all my clothes. By telling the whole story of it, I didn’t think that they would see that in Canada but then I forgot that they showed it on the BBC’s top ten moments of the year, and, my parents saw it! I had to explain it all to them, and my mother didn’t speak to me for a while!

So have your parents been to many or any of your shows?

No, they have never seen me do stand-up but the only time was seeing me on TV doing the naked thing on The Weakest Link! My mother is going to be 90 years old next year, and we’ve all come to some understanding of one and another, and that’s the focus of this show. The show doesn’t go where you think it is going to go; it’s been misunderstood by a few writers who have written that it is a show about faith versus reason. It’s not actually about that, that is one of the threads of it, but the show is actually about me dealing with my wrong, and the mistakes that I make. I talk about really personal things, but I don’t think I am in a position to tell the audience what is right or wrong, I am just a comedian, I only illustrate the fact that when sometimes you do something wrong, you hide it, or you try and get away with it, or you have to admit that you are wrong. You know, sometimes you think you’ve done the right thing, and it ends up being the wrong thing, and you’re horrified, and it ends up turning out for the worst, and you think to yourself that “I wish I’d never done that now!”. Sometimes things happen entirely out of your control, and you wonder if the Universe or God is against you, and then other times you do something that turns out beautifully that you wonder if the Universe and God are for you. The show lives in that realm that luck and grace are either all predetermined or how random it is.