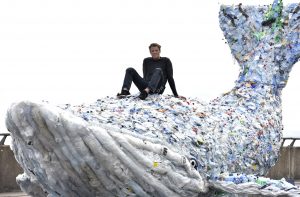 An independent survey commissioned by Sky Ocean Rescue has found that 87% of Brits are concerned by the UK’s plastic usage and 70% of respondents from Wales are willing to see a similar 5p plastic bag ‘charge’ applied to other single-use plastics, such as straws, bottles and cups.

The research highlights a growing awareness around the issue of ocean health, and a desire from the Welsh public to see behaviour change, including incentives to discourage plastic usage, as over eight million tonnes of plastic pollution continues to enter the ocean globally every year.

In a bid to further drive awareness and inspire members of the public to make changes to their own plastic consumption, a 10-metre plastic whale has appeared in Cardiff. The whale is made of plastic bags, bottles and other single-use plastics pulled from the ocean, beach cleans and local recycling plants, and represents the same amount of plastic that pollutes the ocean every second. 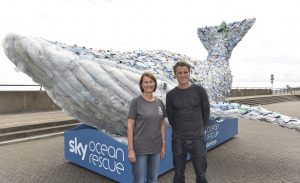 Group Chief Executive of Sky, Jeremy Darroch, said, “Sky is truly committed to raising awareness and encouraging people to change the way they consume single-use plastics to help save our oceans. Research tells us that almost 90% of Brits are also concerned with plastic usage in the UK. Through the Plastic Whale Tour we want to highlight how easy it is to make small changes that can have a real and measurable impact.”

A report by researchers Resource, earlier this year reported that Wales was the third best recycling nation in the world; however, research shows that 85% of the country have still witnessed rubbish left on beaches or floating in the sea.

Keep Wales Tidy Chief Executive, Lesley Jones, said; “Marine litter is a man-made issue that has a devastating impact around the world. The positive news is that we can all play a part in changing this. At Keep Wales Tidy we’re reaching out across the globe through international programmes such as Eco-Schools and Blue Flag; we’re working with Welsh Government and partners across all sectors to implement a marine litter action plan; and we continue to support thousands of volunteers each year to take practical action in their communities. We are delighted to be part of Sky Ocean Rescue’s Plastic Whale Tour, which shows the scale of the issues, we know that we all need to work together to make a real and lasting difference to our marine environment.”

Double Olympic gold medalist rower, James Cracknell, also showed his support for the issue of ocean health. “I’ve spent so much of my life in and on the water, and ocean health is an issue that is very close to my heart. I’ve seen the immense beauty and scale of our oceans when I rowed the Atlantic, but they are now so vulnerable and it’s down to all of us to help protect them. That’s why I’m here in Wales today to encourage people to support the Sky Ocean Rescue campaign, make small changes in their everyday lives and become an Ocean Hero.”

The Plastic Whale Tour will travel through England, Wales and Scotland, visiting iconic beach and water front locations as well as city centres. The campaign will also give members of the public tips on small and easy changes – from using a refillable plastic bottle, to saying no to straws and plastic bags – helping reduce plastic consumption. More details are available at www.skyoceanrescue.com.

Find out more about the Plastic Whale Tour and the issues affecting our oceans at the Sky Ocean Rescue Facebook page, @skyoceanrescue on Twitter, or visit skyoceanrescue.com.