Premier Inn hotels lights up in support of the NHS 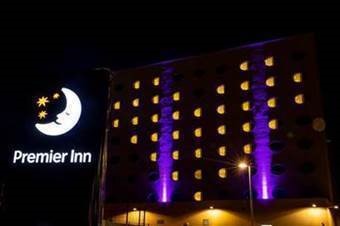 Premier Inn hotels large and small across the UK are being lit up in support of NHS and key workers.

Inspired by an employee with a family member in the NHS, dozens of Premier Inns across the UK are lighting up their windows either by spelling out the letters ‘NHS’ or displaying lit-up heart shapes. Still more are displaying rainbow signs in the windows, with teams planning to light up their windows on Thursday nights in support of the nationwide ‘clap for our carers’.

Hotel Manager, Adrian Andrews who manages the Cardiff Bay and Cardiff City Centre Premier Inns, and whose team are currently supporting the NHS at the City Centre hotel which remains open to key workers, was inspired to light up his Bay hotel in support of the NHS but also had a personal reason for choosing to do so. Adrian Andrews’ aunt, Kaye Walters, based in Bradford, had decided on a career change to qualify as a nurse, and had spent the last four years studying through the OU, and became fully qualified just three months prior to the COVID-19 outbreak in the UK. The night Adrian Andrews decided to light up his Bay hotel was particularly poignant as it would have been the day that his Aunt’s graduation ceremony should have been held, but instead of a cap and gown she was alongside her NHS colleagues at the Bradford Royal Infirmary donning PPE.

Hotel Manager, Adrian Andrews said: “Our team wanted to show how proud we are of our NHS and keyworkers in whatever way we could. It was especially important to me, as my Aunt now works as a nurse and so we wanted to celebrate the important work that she and all key workers are doing. By lighting up our hotel we are able to show in our own unique way how much their commitment means, and based on the local feedback and messages we have received we know lots of keyworkers driving past or living nearby were able to see our lights, and we hope to light them up again this week to continue this support.”

Whitbread-owned Premier Inn continues to play its part in during the crisis.

Premier Inn’s Cardiff City Centre and Bradford Central hotels remain open alongside a further 5,000 rooms across the UK for NHS and keyworkers.

It has also announced a new strategic partnership with food charity FareShare and, following the closure of its restaurants over three weeks ago, has since then donated enough fresh food to make over 200,000 meals. The food will be distributed through FareShare’s national network of charities and community groups, ensuring schools, foodbanks, care homes and homeless shelters all benefit as they work to support those most vulnerable during this crisis.

It is also supporting supermarkets feed the nation by freeing up its logistics network to help transport food to where it’s needed most.