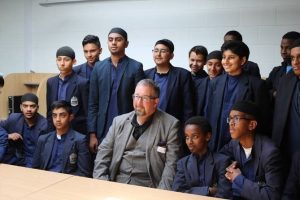 Global Acts of Unity has launched an inaugural poetry competition and is asking young people (aged 11-18) to enter by expressing what ‘unity’ means to them for a chance to win £100 vouchers and £500 worth of supplies for their school.

The contest aims to encourage children to use the power of poetry as a form of expression to capture how they feel about ‘unity’ in their school and their wider community. The goal is to encourage students to explore its meaning, strengthen their barriers against intolerance, and become closer as a community within the school and beyond.

In 2014, Daesh kidnapped David Haines, a humanitarian aid worker and held him captive for 18 months before he was publicly executed for the world to see. Daesh used footage of his murder to try and sow division and fear. In response, Mike Haines OBE created Global Acts of Unity to honour his brother and defy the terrorist’s aims. Mike has spoken to over 90,000 people to date, including hundreds of schools, about how we can harness the power of unity to stand together with people of all faiths and none to defeat those who seek to divide us.

Mike Haines OBE, Founder of Global Acts of Unity said: “I’ve been inspired by many young people on my journey but I want to hear from many more. That’s why we have created Words of Unity to invite young people, as the leaders of tomorrow, to add their powerful and unique voices to this call for unity, acceptance, and understanding.”

With the recent boom in the number of Instagram poets and spoken word artists, GAU is aiming to capture young people’s imagination with the poetry competition.

Founder Mike Haines OBE continued: “There is always a very powerful reaction from young people when I tell my family’s story. In one particular school recently a young student approached me after my presentation. She had written me a poem – and it was a moving message of hope and unity.

That poem inspired me to create this Words of Unity poetry competition. I want to encourage as many young people across the country to think about what unity means to them, how they might bring people together, and what examples there are of unity in their school and community. I know these poems will inspire people across generations and would encourage anyone aged 11-18 to enter.”

The competition is open until 28 February 2020, and written poetry as well as spoken word performances are being accepted covering everything from haikus, to limericks, to rap. The competition ties in with the national curriculum and Key Stage 3 English learning resources and an assembly kit for teachers are available on the Global Acts of Unity website.

Open to all young people aged 11-18. Find out more about the competition and enter now at mikehaines.globalactsofunity.com/poetry-competition/