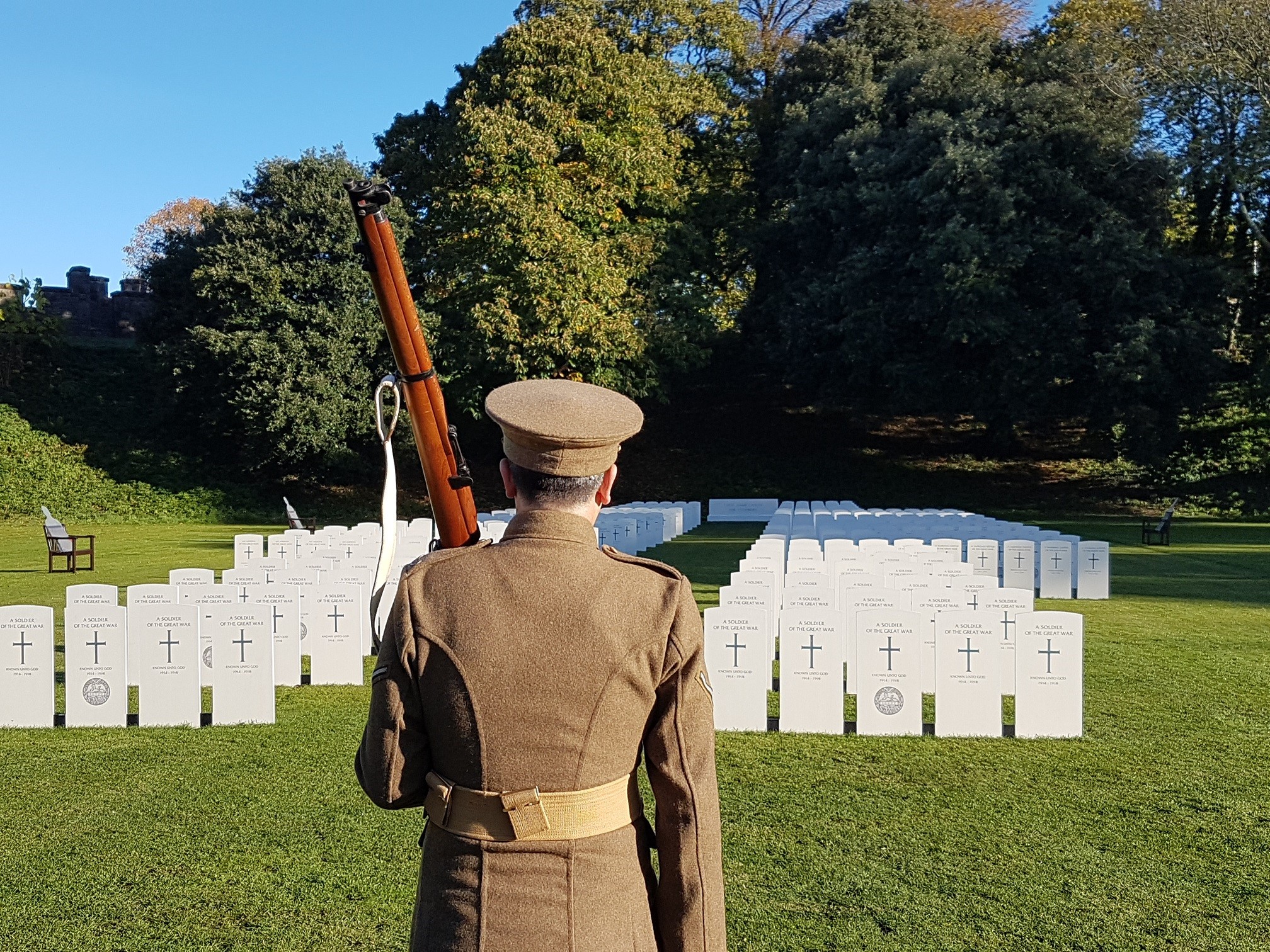 • Commonwealth War Graves Commission (CWGC) has installed a replica cemetery at Cardiff Castle to
mark the centenary of the Armistice.

• The headstones represent the more than 30,000 Welsh war casualties from the First World War and
highlight the different divisions which contributed to the war effort.

• New accompanying exhibition Shaping Remembrance tells the CWGC story, and how Wales played a
part in the fighting and commemoration of the First World War.

• Exhibits include a letter from poet Hedd Wyn’s father, which has never been on public display
before.

A moving reminder of the Welsh war sacrifice has been installed at Cardiff Castle, in the form of a replica
Commonwealth War Graves Commission (CWGC) cemetery. The installation accompanies a new exhibition
about the CWGC’s origins and the role played by Wales in the First World War.

To mark the centenary of the Armistice the cemetery will take over the castle’s courtyard and represent the
more than 30,000 Welsh men and women who gave their lives during the First World War. The installation will
give visitors a flavour of some of the 23,000 CWGC sites around the world where 1.7 million World War
casualties from across the Commonwealth are commemorated, including those in Wales.

At the head of the cemetery is a replica Stone of Remembrance, Sir Edwin Lutyens’ famous contribution to
CWGC cemeteries. Each headstone signifies 100 Welsh war casualties with inscriptions and badges on each
one to represent various regiments and divisions of soldiers who left home to join the war, never to return.

The exhibition, entitled Shaping Remembrance, was officially unveiled by the Welsh minister for culture,
tourism and sport Lord Dafydd Elis-Thomas AM on Wednesday 24 October at the castle’s Firing Line Museum.
It includes a full-size Portland stone CWGC headstone and tells the story of the Commission’s work to
remember the war dead. It also shines a light on Wales’ involvement in the First World War, including a letter
from the poet Hedd Wyn’s father which has never been on public display before.

Born Ellis Humphrey Evans, he died in the first day of fighting on Pilkem Ridge, during the Third Battle of Ypres
(Passchendaele), and was posthumously awarded the bardic chair at the Birkenhead Eisteddfod of 1917, in
recognition of his literary achievements. He is buried at CWGC’s Artillery Wood Cemetery in Belgium.

Dr Glyn Prysor, chief historian at CWGC, said: “As we approach the centenary of the 1918 Armistice, this is an
opportunity to reflect on all those who lived through the First World War, and particularly those who lost their
lives.

“I’m always moved to see the insignia of a Welsh regiment on one of our war graves, or to read a family
inscription in Welsh on a headstone. You can find Commonwealth War Graves Commission cemeteries and
memorials all over the world, as well as in Wales, and this installation at Cardiff Castle will give visitors a sense
of their unique atmosphere.

“Our Shaping Remembrance exhibition tells the story of how the British Empire commemorated its dead and
highlights several fascinating Welsh aspects of that long and emotional process. We’re particularly excited to
share a letter from Hedd Wyn’s father which has never been on public display before.”

Christopher Dale, director of The Firing Line Museum, said: “The Firing Line Museum is delighted to be working
in partnership with the Commonwealth War Graves Commission on this exhibition. It highlights the significant
work that CWGC does in preserving the memories of all those who lost their lives during the two World Wars.”

The Shaping Remembrance exhibition sits in the castle’s Firing Line Museum of The Queen’s Dragoon Guards
and The Royal Welsh, and will be open until Saturday 15 December.

It is estimated that well over 30,000 Welsh men and women died during the First World War. An exact figure is
impossible to calculate, but CWGC commemorates more than 27,000 war casualties from Welsh regiments.
Thousands more died while serving in other units, including in the Royal Navy and Mercantile Marine, the air
forces, and medical services.