Reunited 35 years since the first bone marrow transplant in Cardiff 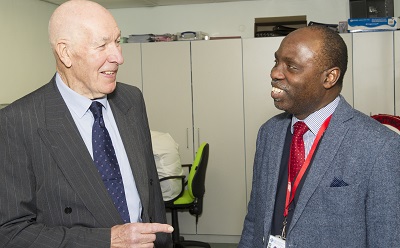 This year marks 35 years since the first bone marrow transplant (BMT) in Cardiff.

Celebrating BMT anniversaries and reuniting with patients and their families and colleagues is a highlight for staff and patients and families. It shows what has been accomplished during this time, the difference it has made to people’s lives and how BMT has changed and looking to the future recognising challenges that lie ahead.

A series of posters have been designed and put up on the unit depicting the history of Stem Cell Transplantation in Cardiff.

Dr Whittaker carried out that first BMT operation and played an important role in the campaign to set up the unit in 1986, said only four operations were done during that first year but now over 150 people receive that care every year.

Pete was one of the first patients to undergo BMT in the purpose-built BMTU back in 1986.

A photograph of Pete together with Louise Humphreys, who was a nurse in BMTU, is on one of the posters showing the laminar air flow room of the original unit in the early years when first opened.

The posters are of great interest to not only staff and students but also patients and their families who are currently undergoing Stem Cell Transplantation.

The first poster shows how Dr Jack Whittaker played an important role in the campaign together with patients and families to develop the purpose-built unit which opened in October 1986.

Prior to this, patients initially had to travel to Hammersmith, London and were placed at the end of an existing waiting list, with the risk of relapsing before they were able to receive a BMT.  This situation clearly could not continue. 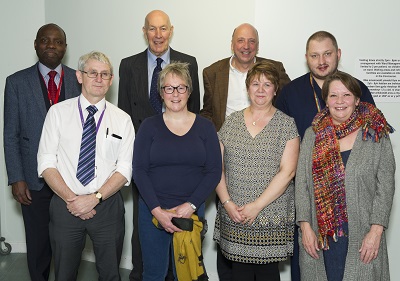 From 1983-1986 a few patients received their transplants in a cubicle in intensive care at the University Hospital of Wales.  Less than 20 people were treated with a BMT prior to the unit opening in 1986. Numbers transplanted steadily increased and currently about 150 transplants a year are performed. The unit changed the lives of many patients in Wales, who were diagnosed with haematological malignancies and has had a serious and lasting impact.

Miriam Atkinson, Staff Nurse on B4 Haematology Unit said: “It was heart-warming to see Pete, after 32 years, reunited with the nurses who had looked after him, including Kathy Heyman now Stroke Liaison CNS, Mandy Williams, no longer nursing and Jane Penny, staff nurse on B4 Haematology.  A number of staff were extremely pleased to meet with Pete who was extremely positive, sharing his story and how since recovery he has fully enjoyed his life, married to Teresa for 25 years and having had many holidays abroad, visiting many exotic places.”