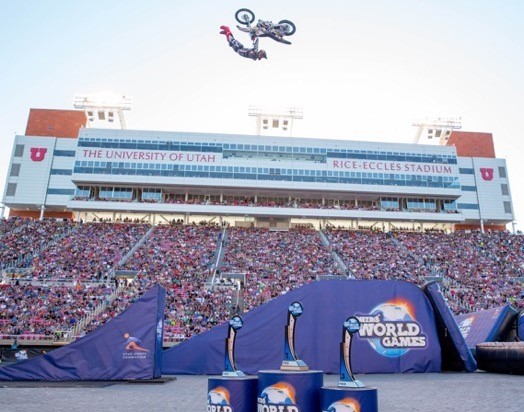 As you walk up the stairs to the Principality Stadium’s pitch, the sense that your about to witness an event that will be a historic moment in Action Sport history hits you.

After short speeches from all present, discussing themes such as the excellent welsh outdoor action sports facilities. Let’s face it Wales has some amazing trails, beautiful scenery along with a national outdoor culture. Which is ideal for the fans of Nitro World Games to get out and explore. Andy Edwards introduced a PR clip to introduce Nitro World Games. With the champions from Nitro World games being particularly excited about performing in a roofed stadium and the impact of not having weather elements to consider. This is the first time Nitro World Games will be held outside of America with the games previously being held in Utah.

With Passion and praise present in each of the short speeches for both the event and each other, this event promises to be a unified team effort. The headsets left on seats for attendee’s proved popular during Lord Dafydd Elis – Thomas’s speech as they acted as a translation device from Welsh to English.

The signing took place while a team of talented Nitro Circus FMX riders performed a series train of stunts over-head, including backflips and an encore in the ultimate photograph opportunity.

For downloading video of Nitro World Games go to: https://we.tl/t-jsVX7vTRKD

For more information on Nitro World Games go to: www.nitroworldgames.com