Reviving the Christmas Spirit – With book donations to homeless charity 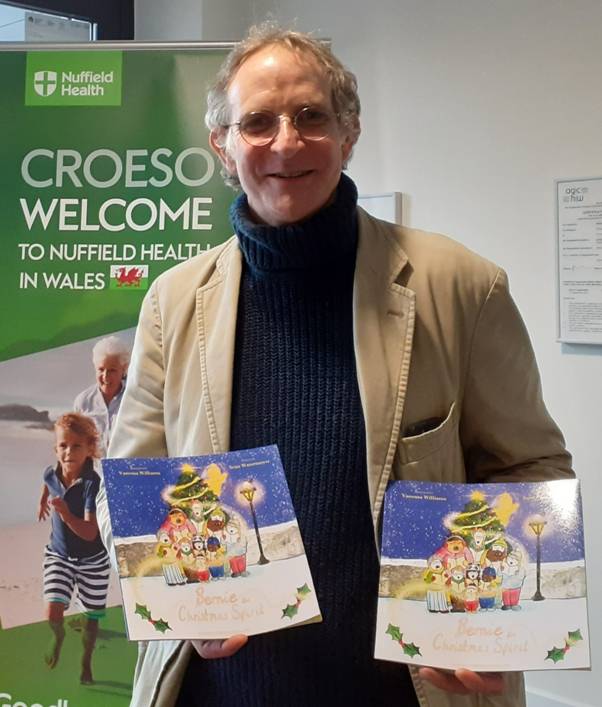 An exceptional collaboration between a Cardiff consultant gynaecologist and a children’s illustrator has resulted in the launch of a beautiful children’s rhyming Christmas-theme book, with all the royalties going to a young people’s homeless charity.

Family man Sean Watermeyer has been helping couples to conceive, carry and deliver babies for over 15 years. Vanessa Williams graduated in illustration earlier this year but as a student was already working with Sean Watermeyer on a range of books. Often inspired by tales he told his three children, now all students, whilst they were growing up, medic Sean comes from a literary family with both his mother and grandfather having worked as writers and journalists.

Alongside seven others, Sean is a consultant gynaecologist with Nuffield Health Cardiff and Vale Hospitals, part of the largest UK health charity, which is supporting his charity book launch. He also works in the NHS at the Royal Glamorgan Hospital, Llantrisant, serving the people of Rhondda Cynon Taff.

Like many of his colleagues, he has experienced and recovered from Covid and he pays tribute to the amazing work and dedication of all staff in the healthcare sector during this pandemic – the whole fantastic team who continue to work in such challenging circumstances. Since the spring, Sean has worked with NHS cancer patients at the Vale hospital, as part of Nuffield Health pandemic support.

At Nuffield Health in Cardiff, he works as one of the specialist menopause consultants. Today, most of his NHS work is focused around the diagnosis and treatment of gynaecological cancer, although he still does infertility work and in fact one of his previous publications was a book designed specifically to help couples who were having difficulty conceiving.

For a time he had the privilege to work with PONT, Partnership Overseas Network Trust, based in Pontypridd, which does fantastic work in Mbale, Eastern Uganda. Visits to Mbale certainly taught him a great deal about human need in Uganda, but also opened his eyes to the very real need at our own back door. This helped make his decision to raise funds for Centrepoint, a charity that helps and rehabilitates young, homeless individuals across the UK.

The colourful book, entitled “Bernie the Christmas Spirit” features a loveable little spirit who spreads Christmas love and joy, but he begins to fade as people ignore, and become hardened to the giving and joy of Christmas, until the generosity of a little girl called Mary changes peoples’ hearts. All the proceeds are going to Centrepoint, which provides housing and support for young people regionally. Prince William, HRH The Duke of Cambridge, has been a patron of the charity since 2005.

The Christmas book is an ideal stocking filler, priced at £6.99, available from Amazon Books and at the Nuffield Health Vale Hospital reception desk, Covid-restrictions permitting.