Rookwood Hospital will be celebrating its 100th anniversary during 2018.  To mark this special occasion, Cardiff and Vale University Health Board (UHB) will be hosting a series of events for staff, patients, visitors and the local community.

The Artificial Limb and Appliance Service, The Electronic Assistive Technology Service, Headway, South Wales Mobility and Driving Assessment Service and Rookwood Sound hospital radio are all based at Rookwood Hospital.

Rookwood has had an interesting and varied past.  Rookwood was built in 1886 by the late Colonel Sir Edward Hill as his home, and subsequently Lady Hill, lived there until 1917. 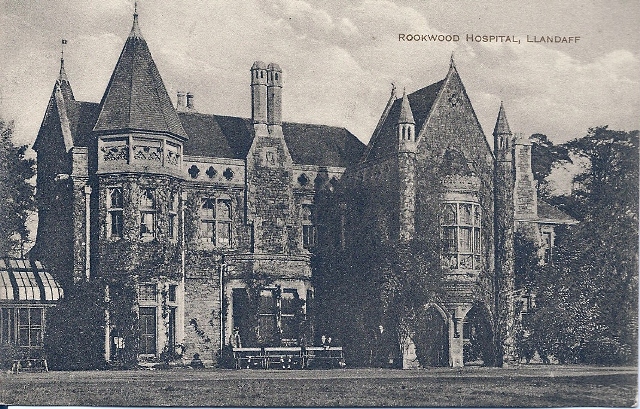 The name ‘Rookwood’ was given to the house by Lady Hill during its construction. Before her marriage she was brought to see the building and was asked to find a suitable name for it. When she came to the property a number of rooks were flying overhead and she immediately thought of ‘Rookwood’, and decided that should be the name.

In 1918, Rookwood was taken over for use as a convalescent home.

At the end of the First World War it was purchased by Sir Lawrence Phillips and presented to the ministry as a home for Welsh paraplegic pensioner cases.  Following this it was continued to be used as a hospital by Cardiff and Vale UHB.

In 1932, after building works had taken place to increase capacity, it became a general hospital.

During the 1970s and ’80s Rookwood had eight wards caring for people with spinal injuries, brain injury, stroke, multiple sclerosis, and Parkinson’s disease.

In 2001 the Spinal unit moved, utilising wards 4 and 5, which then provided 31 beds for spinal injuries and five beds for amputees.

To this day, Rookwood is predominantly used as a rehabilitation hospital.

Do you have any interesting stories about Rookwood you wish to share? Please email [email protected] or contact 02920 746478.

The full table of events can be found below: