Dafydd James is a former Welsh international rugby player who toured with the British and Irish Lions. 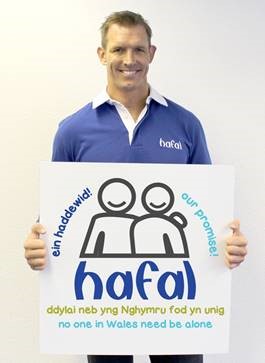 Recently Dafydd spoke publicly about his struggles with mental health following his retirement from the game. He knows all about feeling lonely and isolated, and he wants to make sure that no one else who finds themselves in the same situation is unsupported.

So we are delighted to announce that Dafydd has become Promise Ambassador for Welsh charity Hafal!

Hafal’s Promise is that every person in its client group who seeks help from the Charity will receive lasting friendly contact through membership of Hafal and through its online community Clic, by email, social media, on the phone, or in person.

Dafydd will lead a campaign throughout Summer 2019 to raise awareness of Hafal’s Promise across the 22 counties of Wales, ensuring that people that people who experience loneliness and isolation know that they are not alone.

Dafydd said: “It was difficult to share my mental health problems publicly, but the reaction has been fantastic. I have received so much support from the Welsh public for talking honestly about my struggle. I’ve been blown away!

“Now that I’ve opened up about my experiences my goal is to help others in a similar position. If I can save just one person then that’s my next vocation.

“As a result of speaking out about mental health issues, I linked up with Welsh mental health charity Hafal. We got talking and I started to find out more about the Charity does across Wales.

“The more we talked, the more I felt supported in my struggles – and the more I understood the importance of what Hafal does for people affected by mental health problems.

“I was especially interested in Hafal’s work on loneliness and isolation. I know all about feeling lonely and isolated and I want to make sure that no one else who finds themselves in my situation is left to feel unsupported.”

The 2019 campaign to raise awareness about Hafal’s vital “Promise” service will see a launch in the Principality Stadium followed by 22 county events across Wales. Follow Hafal’s Facebook and Twitter pages for the latest updates!