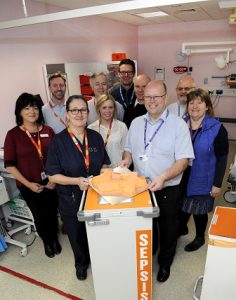 A new electronic flagging system for sepsis has been launched at Wales’ largest Emergency Unit to improve patient care.

The ‘Sepsis Star’ complements the existing sepsis screening tool which is already in place at Cardiff and Vale University Health Board, and is applied when a patient screens positive for red flag sepsis.

A team from the health board worked together over the past six months to develop the new system for the Emergency Unit workstation and Clinical Ward Workstation at University Hospital of Wales (UHW), to improve the way sepsis is recognised and treated.

The flagging tool was developed alongside an e-learning module, designed by Peter Noneley, to provide essential training to clinical staff in the use of the Sepsis Star and its benefits.

The new flagging system was designed to be as simple and quick as possible, so it does not add to the workload of busy unscheduled care staff but helps patients receive the Sepsis Six care and treatment required in a timely manner.

Sepsis is a potentially life-threatening condition, where the body attacks its own organs and tissues as a reaction to an infection. At least 260,000 people a year in the UK suffer from serious sepsis which can cause death or multiple limb amputations. However sepsis can be easily treated if caught early, with earlier identification and treatment across the UK estimated to save around 14,000 lives.

Paul Morgan, Sepsis Lead for the health board said: “Sepsis unfortunately kills around 44,000 people each year in the UK, but better education and quicker treatment can reduce this number. The team has worked hard to develop the online flagging system so that patients who come into an acute setting with symptoms of sepsis will be treated quickly and appropriately, which will greatly improve their chances of survival and recovery.”

Any patient who is brought to the Emergency Unit or Assessment Unit at UHW and screens positive for sepsis will now be entered onto the electronic system. This will then start the clock to give a timescale to complete the Sepsis Six within one hour.

The Sepsis Star will also follow the patient in their hospital journey so ward staff can access the information during a ward admission.

Laura Potts, Clinical Leadership Training Fellow said: “The primary use of the Sepsis Star is to alert staff that a patient has sepsis and create a clear record of what treatment they have received. The star will also enable data about the incidence of sepsis and compliance with Sepsis Six treatment to be collected easily.

“Individual departments will be able to access the information collected to provide rapid feedback and facilitate quality improvement initiatives. In addition it will enable the health board to provide Welsh Government with meaningful data about sepsis and sepsis care in Cardiff and Vale.”

The Sepsis Star tool has been launched at UHW and will shortly be rolled out across the health board so all acute admission patients will be effectively screened, enabling 24/7 data collection.