Employees working in leisure, culture and sport roles take more sick days than any other industry, a new study revealed. 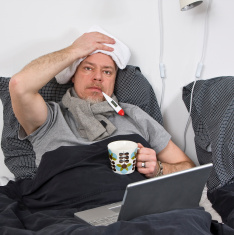 Nationally those employed in this field scored highest (3.8) with workers in telecoms, marketing and education also featuring high in the sickliest professions.

Teachers take above the national average at 3.17 days per year, while those working in the manufacturing industry or industrial labour take the fewest days off sick a year (1.59). In comparison the average Welsh employee takes just over two and a half sick days per year.

The research, which was commissioned by family focussed insurance brand, There®, found that UK workers in government or public services had taken the most sick days nationally in their working life, so far taking a huge 66 days over the course of their career.

While those in environmental, recycling and sustainability roles had taken the least sick days across their career to date, racking up 18 absences in their working years – almost half the national average (36 days).

The research showed that 18 per cent of workers in Wales have been injured or made ill as a direct result of doing their job.

And sometimes serious illness or injury is unavoidable with nearly a third of workers of workers studied in the region experiencing something that prevented them from working for a whole month or more.

For UK workers who are self-employed, this figure rose to 35 per cent. In fact nearly twice as many self-employed Brits had been injured or got ill at work resulting in time off (31 per cent versus 16 per cent).

However, just one in ten Welsh workers have insurance protecting them should they be unable to work for long periods of time.

Philippa McLaglen from There added: “It’s ironic that we worry about taking even one day off sick when so many of us have experienced what it’s like to be laid up and not able to work for a month or more. That situation can have a very real financial impact if wages aren’t coming in. Especially for people who are self employed and don’t have a financial safety net.”

Health workers across the UK rated their boss the most strict when it came to taking sick days and also felt they were worked too hard with too few staff – 47 per cent felt this led to them being susceptible to illness.

And as well as taking the most sick days per year, those working in the leisure and culture industries also make the most trips to the doctor (3.11 trips per year), while those in manufacturing or labour roles avoid the doctors the most (1.46).

Those working in health services were most likely to feel their boss was strict or uncompromising when it came to taking a day off sick, while those in media/publishing had the least strict bosses.

43 per cent of Welsh workers dread having to make the call to their boss to tell them they are sick- with flu, stomach bugs and viruses the leading causes of missing work.  Similarly, 31 per cent admitted they put on a ‘sick voice’ if ringing in to get a day off work.

More than half of the region’s workers have needed a sick day but been too afraid or unable to take one because of work pressures – on a national scale the health industry feels that most with 57 per cent of workers experiencing this nationally.

Yesterday Philippa McLaglen, Marketing Manager from There® explains: “Our research shows that we really are a hard working nation, with hardly a shirker amongst us. There is a low average number of sick days, and we feel the pressure when we do have to take time off for illness.

With financial protection, anything is better than nothing to pay the bills if you get injured and can’t do your job. Our Too ill to work insuranceis designed to pay out if someone does injure themselves, like breaking an arm or leg, and can’t do their job for a while.”

AVERAGE SICK DAYS TAKEN IN THE UK PER YEAR BY INDUSTRY