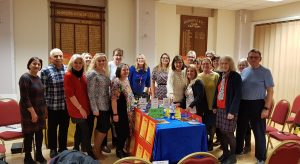 A slimming group in Cardiff has raised £350 in support of a local family whose son passed away as a result of undiagnosed Type 1 diabetes.

Peter Baldwin was just 13 when he passed away in January 2015.  Since then Peter’s parents, Beth and Stuart, and sister Lia helped Diabetes UK Cymru launch Know Type 1, a campaign to raise awareness of the common early symptoms of the condition, so that children are diagnosed sooner and more safely.

Type 1 diabetes is a serious, lifelong condition where blood glucose levels are too high because the body can’t make a hormone called insulin. No one knows exactly what causes it, but it’s not to do with being overweight and it isn’t currently preventable. The symptoms can develop very quickly. If not identified and diagnosed in time, children can become seriously unwell with diabetic ketoacidosis (DKA). This can be life-threatening.

Lisa Hayes, a Slimming World Consultant in Rhiwbina and Thornhill and a close friend of Beth Baldwin, encouraged her groups to support the family’s fundraising by donating the change from their weekly attendance fees. Over the last four years the pounds have added up, with the groups having raised over £350.

Lisa said, “To see your friend go through the tragedy of losing a child is unbearable, and I wanted to do as much as I could to support her and her family. I encouraged my members to donate the change from their fees in Peter’s memory. To see their five and ten pences add up to such an amount is phenomenal. My groups know how much the cause means to me and by telling Peter’s story, it’s also an opportunity to raise more awareness.

“I’d like to say a big thank you to all my members for their generosity over the years. It’s so rewarding to play even a small part of this important campaign, raising awareness of the symptoms of Type 1 diabetes, so that other families don’t have to go through the same thing.”

Around 1,400 children and young people in Wales have Type 1 diabetes, but 1 in 4 are not diagnosed until they are in DKA.

Know Type 1 encourages people to look out for the common early symptoms of the condition, known as the 4 Ts:

If a child is going to the toilet a lot, has increased thirst which they can’t quench, is more tired than usual or is losing weight (getting thinner), it could be a sign they have undiagnosed Type 1 diabetes. If a child shows any of the 4Ts, Diabetes UK Cymru advises you to tell their parents or carer to take the child to a doctor immediately for a finger-prick test.

Dai Williams, National Director, Diabetes UK Cymru said, “We’d like to say a huge thank you to Lisa and her Slimming World groups for their support of our Know Type 1 campaign. Thanks to the tireless work of the Baldwin family, and their supporters, the campaign is already making real change.

“Raising awareness of the symptoms and being vigilant can put a stop to children needlessly becoming seriously unwell. We already know of several children who have been diagnosed safely as a result of hearing about the campaign. Know Type 1 is Peter’s legacy and something we are so proud to continue to work on.”

For more information about Know Type 1, visit: https://www.diabetes.org.uk/in_your_area/wales/campaigning/know-type-1—wales . To order resources such as posters, leaflets or further information about the 4Ts, contact Diabetes UK Cymru on [email protected] or 02920 668276.