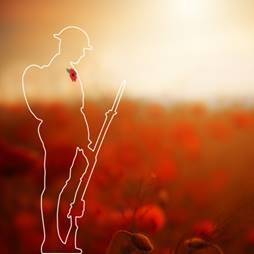 Original music inspired by the British & Irish Lions remembrance of war veterans was released on Monday 5 November 2018 in support of the ground-breaking There But Not There Campaign.

The moving and original classical music single has been released for download to raise money for Remembered, the charity behind the There But Not There Campaign to commemorate the centenary of the World War One Armistice.

As this centenary Armistice Day approaches the airwaves will be filled with emotive music as we remember the fallen of the Great War.  This year a new track, inspired by the British & Irish Lions acts of remembrance when on tour around the globe, and donated to a ground-breaking remembrance campaign by its producer Ben Uttley of Stamp Productions. Director of Operations, Remembered and a veteran of the War in Afghanistan, Rowley Gregg MC commented “From the paintings of Paul Nash to the poems of Siegfried Sassoon, the Great War has always had an unbreakable connection with the arts. We are delighted that Ben and  Benjamin are continuing with that tradition, and that the money raised will provide vital funds to the campaign.”

The There But Not There campaign is commemorating a century since the 1918 armistice through the sale of iconic Tommy figures across the UK. The sale of these Tommies – both 10 inch and six foot versions – has to date raised over £4 million for a host of military and mental health charities. Rowley Gregg MC added: “There But Not There has three principle aims; to commemorate the fallen, to educate future generations as to the futility of war and to raise funds for veterans who so desperately need our help. This wonderful piece of music beautifully encapsulates all three of these aims, bringing with it the haunting solemnity and poignancy that the First World War evokes.”

Filmmaker, Ben Uttley, was inspired to donate proceeds from the release of the track to the There But Not There campaign.  Remembrance was a big part of his upbringing at Harrow School where 2,917 Old Harrovians served in the Armed Forces in WWI. Having regularly witnessed his father and rugby legend, Roger Uttley OBE’s remembrance values from rugby, the final inspiration came from witnessing the British & Irish Lions’ acts of remembrance first hand when visiting war memorials across the world.  Those occasions had a profound and humbling effect on the players like Sam Warburton and filmmaker Ben Uttley, who then commissioned and produced the track.

Sam Warburton OBE said, “To know that the inspiration for Ben to create the orchestral single, There But Not There, arose during our visits to war memorials during Lions’ tours to Australia and New Zealand is fantastic.  It’s a powerful reminder of the importance of remembering the sacrifices of others, then and now.   Like sport, this music can help us heal and bring people together.  I would encourage everyone to download this track which is fundraising for such a great cause.”

At his own expense, Ben Uttley commissioned composer Benjamin Hollway to create a moving musical tableau of remembrance which was then recorded by the City of Prague Philharmonic Orchestra under the baton of acclaimed Welsh conductor Owain Arwel-Hughes CBE.  Ben Uttley commented: “Music is one of the best ways to evoke emotion. We are in the unique position of having created and therefore owning a music track which has been crafted with the sole purpose of generating the feel of a moment of reflection for loved ones, and of countrymen, and women lost.”  Both producer and composer have family and friends who have served in the forces and wanted to take the opportunity to give back to those whose lives have been affected by the psychological impact of war.

Profits from the download sales of the classical music piece There But Not There will help heal those suffering from the hidden wounds of war, while also commemorating those fallen in the great war as the centenary of the WWI Armistice Day approaches on 11 November.

As a first-time music producer, Ben Uttley describes the experience:  “I am so grateful to be able to raise my family in a country as free as ours. That is only possible because of the sacrifices that our service men and women have made. I was simply compelled to try and create something that would contribute. The music was conceived as a passionate embrace between the past and the present, a moment of uplifting gratitude. Moreover, I feel that the composer and conductor have really captured something sincere and worth sharing. Hopefully, others will too, and possibly it helps to make a small contribution to those most deserving of it.”

Upon returning to the UK, filmmaker Ben Uttley was determined to capture in music the significance of those moments that had transcended the sporting context. With many of those involved donating their time and expertise in service of supporting those servicemen and women who suffered, and continue to suffer from the effects of war, the team came together in Prague to capture a profoundly beautiful performance and interpretation from the gifted Owain Arwel-Hughes CBE and City of Prague Philharmonic Orchestra.

All profits from the download sales of the classical single will be donated to Remembered, the charity behind the There But Not There Campaign to commemorate the centenary of the end of World War I.