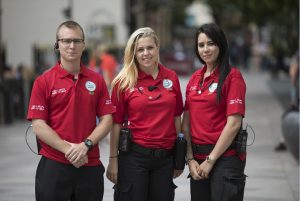 In April, Cardiff BID appointed seven Street Ambassadors in Cardiff to be their eyes and ears on the capital’s streets, give local businesses a voice and make sure tourists have the best possible experience in the city.

Three months on, the Ambassadors have visited over 750 local businesses, given directions to over 650 tourists from as far as Canada, Japan, South America and China and cover eight to eleven miles a day on foot, hearing about the main issues for business across the city.

Seven days a week, the Ambassadors record every conversation they have with businesses so the BID can prioritise its investment. From discussions so far, the top issues for businesses across the city are; rough sleepers, damaged pavements, cycling in pedestrian areas, lack of parking and begging.

The Ambassadors have also acted as the city’s very own super heroes reuniting long lost father and daughter, removing graffiti, cleaning up litter and even assisting police with the arrest of a wanted woman.

One of the people the Ambassadors helped was Ella Souchet, visiting Cardiff from France for the Women’s Champions League final. She emailed the team: ‘I was in Cardiff for the Women’s Champions League Finale and I would like to thank all of your Ambassadors for guiding all of us, lost people, into this beautiful city. A very special thank you to Louise, who helped me a lot to go and get back to the stadium!’

Another damsel in distress was Ann Lockwood, an Australian from France who visited the capital in May of this year to sit a university entrance exam. She sent this message to the BID: ‘I am a young Australian girl living in France and yesterday I put myself in a very terrifying situation when I left my phone on a national express coach after getting off at Cardiff university. This has been my first time in the UK and I had been here less than 24 hours when this occurred. I am writing to express my deepest appreciation for what your company does.

‘If your employee Andy had not gone way out of his way to help me, I would have been alone in a foreign country with no way to get home or contact anyone I know.  I was very distressed and Andy took it upon himself to make it his mission to help me retrieve my phone. I had asked many people for help but no one could or would help me. Andy asked many people for various clues and directions and eventually led me to the bus depot where we found the bus I had been on and I retrieved my phone. I cannot elicit to you the seriousness of the situation I would have been in if Andy had not helped me. I would not have been able to get to the airport today and go home to Paris, therefore the children I look after would have been left alone waiting for me the next day, I could not have bought a new phone or a new flight because I don’t have enough money with me, and I definitely could not have gone to my university entrance exam today. So, I thank you again for your important services and I hope you continue to help many people the way I was helped.’

Following the success of the Street Ambassadors, Cardiff BID have employed a further three recruits, bringing the team up to ten. Jodie from Canton, Jack from Essex and Emily from Abergavenny will join the group and start patrolling the capital from this week.

Executive Director of Cardiff BID, Adrian Field, said: “We’re delighted with the success of our Street Ambassadors so far so the next obvious step was to increase their numbers. Their work is invaluable to us and becoming increasingly invaluable to the city. Feedback from businesses on the Ambassadors has been really positive and the conversations they are having is giving us insight that helps us plan our investment. We are currently working on how to negate many of the key issues regularly being brought up by our levy payers.

“The three new Street Ambassadors will bolster our efforts to ensure the team covers even more ground, helping more and more businesses and visitors every day. The Ambassador scheme has been a brilliant start to what we are sure will be a really positive five years for Cardiff.”

After being voted in by local businesses in July 2016, Cardiff BID covers 130 streets and over 990 business levy payers across the Welsh capital, making it one of the largest in the UK. The Ambassador scheme is one of many new initiatives from Cardiff BID, as well as discounted Park & Ride services for businesses, floral decoration and extra support for Cardiff Street Pastors.

For more information on Cardiff BID, the Street Ambassadors and future plans for the Business Improvement District, visit cardiffbid.com

Who are the new Ambassadors?

“I applied to be a Street Ambassador after finding office jobs too mundane, I wanted a new challenge, something that would be different every day. I’ve lived in Cardiff all my life and am really excited about trying to improve the city and making a difference. I’m most looking forward to getting involved with helping the homeless, it’s something I’m really passionate about and I know Cardiff BID is already working with homeless services in the city.”

“I’ve lived in Cardiff for the last 3 years after coming here to study, I love the city and working as a Street Ambassador for Cardiff BID is a perfect job for me. I’m looking forward to getting out and helping the people of Cardiff and not being cooped up in an office all day! Cardiff is a growing city with a great atmosphere and I’m looking forward to being part of its development.”

“I’d just finished university and was looking for something different to do when I met one of the Street Ambassadors, Louise, in Cardiff city centre. She described the work she was doing and it sounded perfect for me, I love walking and keeping fit and I’m a real people person.  I speak fluent Welsh so I’m hoping that will help with speaking to local businesses and tourist from other parts of Wales. I’m really looking forward to start visiting businesses and doing what I can to help.”