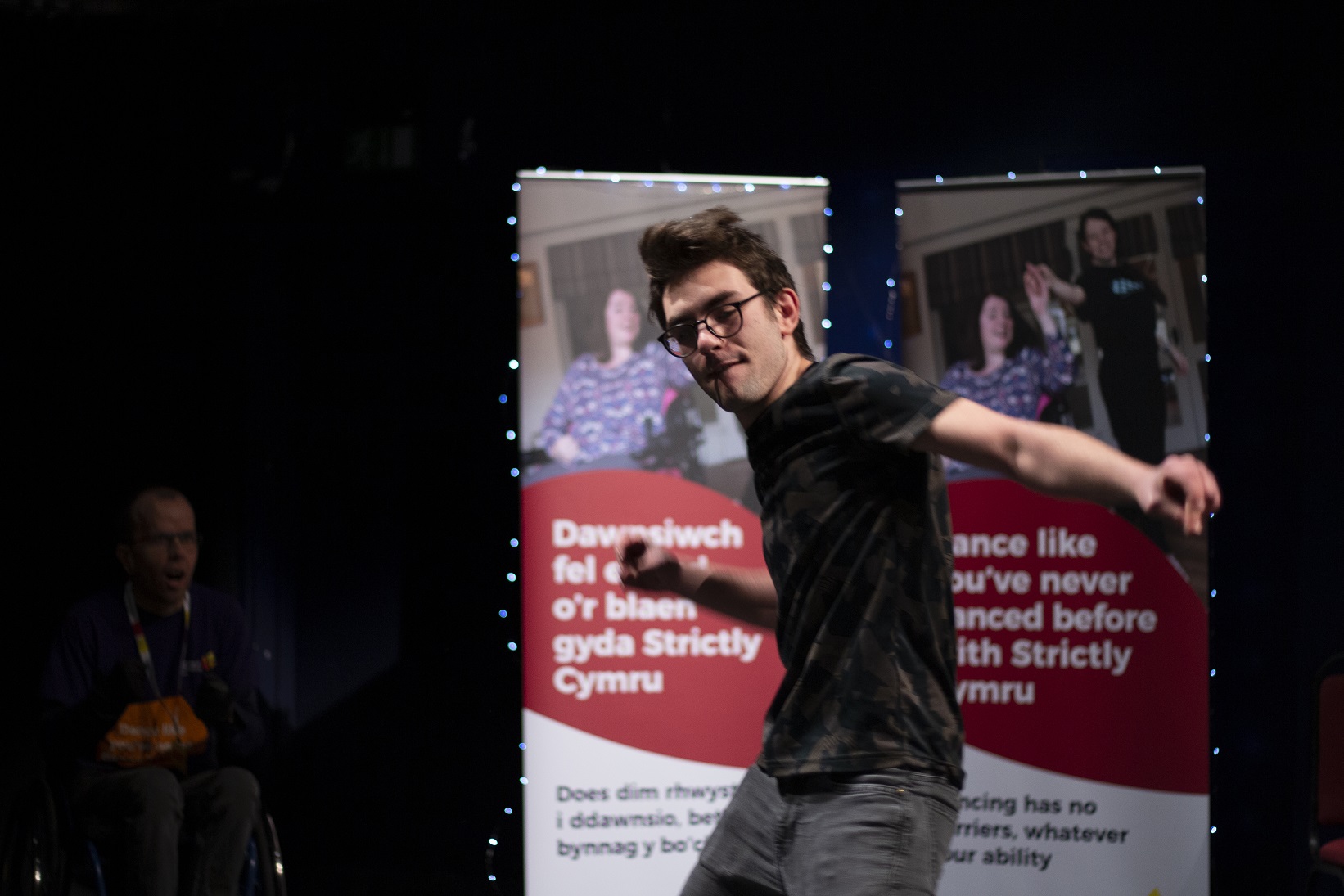 Disabled people from all over Wales have waltzed into 2020 for Strictly Cymru – the country’s renowned inclusive dance competition.

Run by charity Leonard Cheshire, in partnership with the national governing body Paradance UK, the competition has seen dancers in both inclusive and wheelchair-specific categories compete in six heats across South Wales, in preparation for the grand final on 6 June. Strictly Cymru is now in its third year.

Winning in the inclusive categories at the Carmarthen heat on 17 January were Coleg Sir Gar students Kieron, Toby, Thomas, and Max, as well as Richard, who came independently from Coleshill Day Centre in Llanelli and wowed the judges with his Michael Jackson inspired fast feet and moonwalk. A few days later, Rebecca, Chloe, and Anesha from Heronsbridge School lifted the trophy at the Bridgend heat on 21 January.

Gower College students Daniel and Carys wowed the judges with their synchronised dancing at the Cardiff heat, while Coleg Gwent student Matthew secured a place on the final in the inclusive heat held in Newport recently.

Meanwhile, in the wheelchair dance category, dancers Chad and Ben took gold in Carmarthen and Bridgend respectively. The Carmarthen heat rang with the sound of Chad’s catchphrase of “Absolutely fantastic!” Then, the fifth heat in Cardiff saw the youngest person to take part in Strictly to date, five-year-old Inga, win in the wheelchair category, before Robin John won the final wheelchair heat in Newport after being inspired by his partner Dianne, who was highly commended in last year’s competition grand final.

Dance instructors from Paradance UK also took the participants, who came from schools the community and Leonard Cheshire services in the area, through their paces ahead of each dance-off to give everyone the best chance at reaching the final.

Chad said: “It has been a really great two days and I’ve enjoyed getting to know new people and learn tango. I’m looking forward to the final.”

Robin John, winning at Newport, said: “It’s absolutely wonderful, I’ve tried before and lost, but it feels on a whole different planet to win a heat! I’m looking forward to the final and don’t mind which genre of dance I get, I can adapt to most things.”

Ruth Jones, MP for Newport West, was a judge at the heat there. Ruth said: “I wasn’t sure what to expect beforehand, but it was amazing. As you walked into the room the enthusiasm hit you like a wave. It was so hard to choose a winner because they were all brilliant in their own way, everybody did the maximum they could possibly do.”

Alan Dear, Head of Theatre and Arts at Newport Live, helped support the Newport heat and said: “It is the most joyful thing I have done in years.”

The heats were open to people of all ages and abilities and the overall winners of the competition will be crowned in the Ffwrnes theatre in Llanelli on 6 June 2020.  There they will receive the coveted Strictly glitter ball trophy.