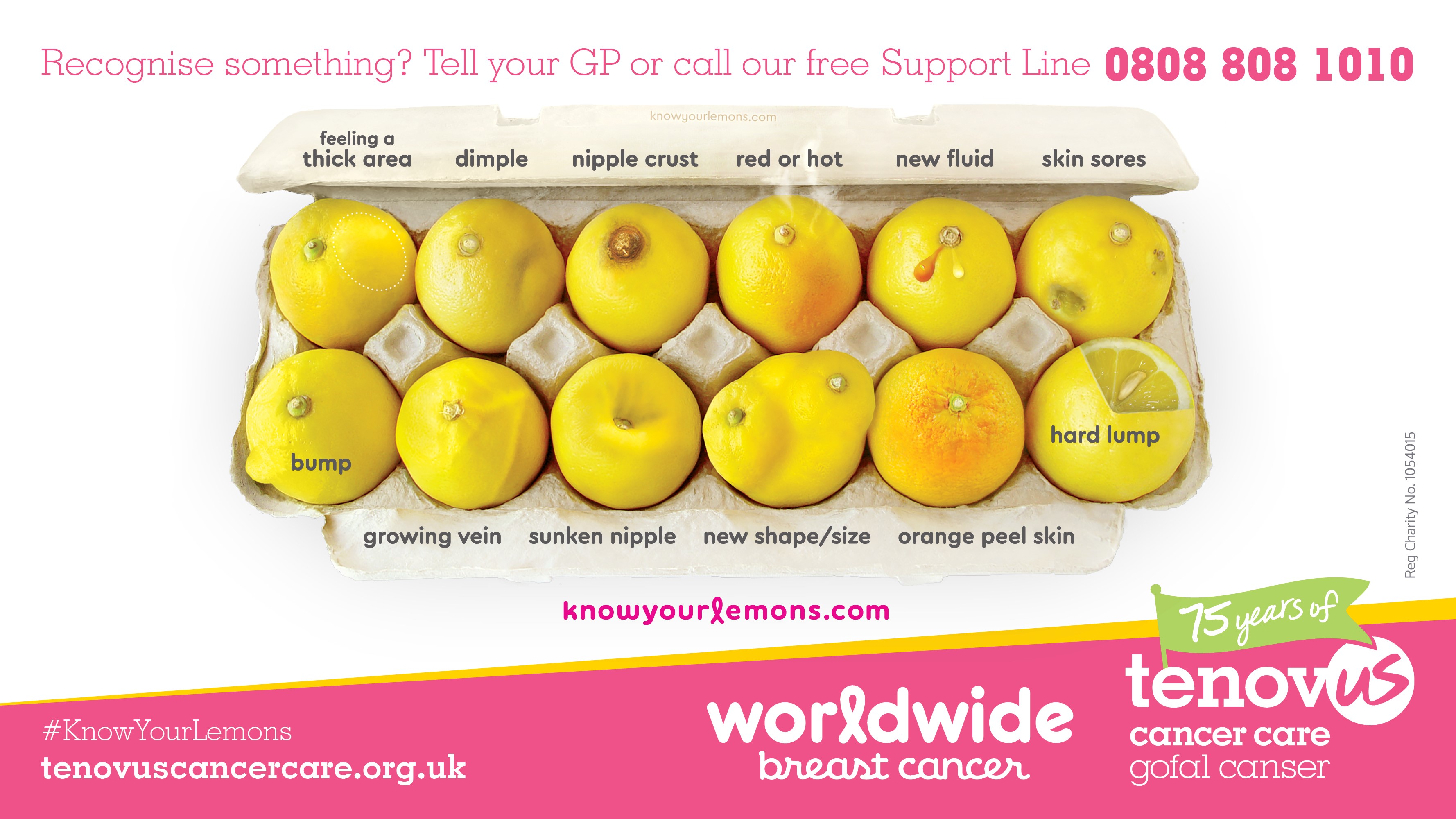 The global campaign has been used online in more than 90 countries around the world and translated into 16 different languages, helping to educate more than 200 million people.

Its striking Know Your Lemons image, which is based on extensive patient research and advice from oncologists around the world, shows 12 common and less common symptoms of breast cancer.

This will feature on posters in 500 GP surgeries in Wales thanks to a new partnership between Tenovus Cancer Care, Worldwide Breast Cancer, the Welsh Government and pure lemon juice drinks brand PLj.

Rhian Edwards, Director of Research and Support at Tenovus Cancer Care commented: “Breast cancer is the most common cancer in the UK and kills around 11,400 people every year, with one in eight women diagnosed with breast cancer at some point in their lives.

“We know early detection greatly increases a patient’s chances of survival and the Know Your Lemons image is a simple but highly effective way of improving people’s knowledge about the signs and symptoms of cancer.

“We’re proud to be working with Worldwide Breast Cancer and the Welsh Government and would like to say a special thanks to Know Your Lemons ambassador Dawn Wilson who has worked tirelessly to bring all the parties together to help spread the message in Wales.”

Dawn Wilson, 36, from Hengoed, was diagnosed with breast cancer in 2014 but experienced delays because a lump on her breast was wrongly diagnosed as a cyst, and two lesser-known symptoms went unnoticed by her GP. Her cancer initially went into remission but returned last year and she now has been given a terminal diagnosis.

She is now an ambassador for the Know Your Lemons campaign in the UK and met with Cabinet Secretary for Health and Social Services Vaughan Gething at the Senedd on Monday 1st October to discuss the roll-out of bilingual Know Your Lemons posters to every GP surgery in Wales. 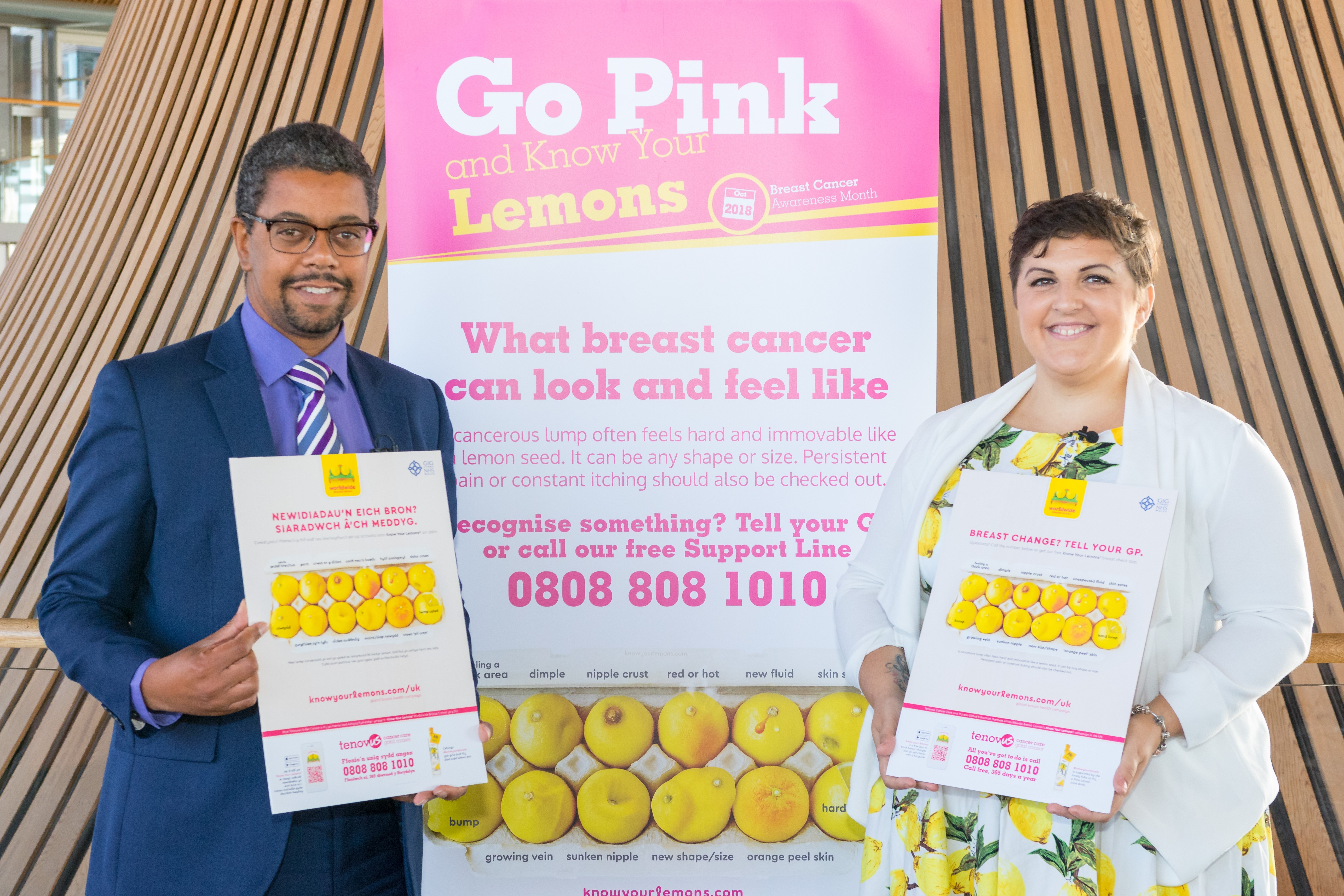 Health Secretary Vaughan Gething said: “I am pleased to offer my support to the campaign; I know how hard Dawn has worked to raise awareness of the symptoms of breast cancer.

“While we are seeing significant improvements in cancer survival here in Wales you can never be complacent and I want to see continued progress.

“We know outcomes are better for earlier diagnosed cancers; the treatment is also less intensive for the person affected. Early detection is at the forefront of our approach that’s why the ‘Know Your Lemons’ campaign is so very important.”

Worldwide Breast Cancer is the global non-for-profit charity behind the Know Your Lemons campaign, set up by designer Dr Corrine Beaumont in 2014. After losing family members and friends to breast cancer, she discovered there was no simple, easy-to-understand material available about the symptoms of the disease. She developed the campaign as part of her doctoral studies in the UK.

She is delighted to be working with Tenovus Cancer Care, Welsh Government, PLj and patient Dawn Wilson in Wales.

Dr Beaumont said: “Our mission is ambitious: to educate every woman and man in the world about breast cancer symptoms. Until we have a cure, the best chance for survival is early detection and education is key to making that happen. With Know Your Lemons, for the first time we can clearly show breast cancer symptoms and raise awareness beyond just a lump. We are thrilled that this campaign has been endorsed by the Welsh NHS and will be educating so many people in the UK.”

The Know Your Lemons poster campaign is being supported by pure lemon juice drinks brand (PLj). They have printed more than 100,000 Know Your Lemons instructive tags and placed them around the necks of their PLj bottles, which will be sold in supermarkets throughout the UK during Breast Cancer Awareness Month this October. Through the sales of their bottles they are also funding the printing of the posters for GP surgeries nationwide and 64 Tenovus Cancer Care shops.