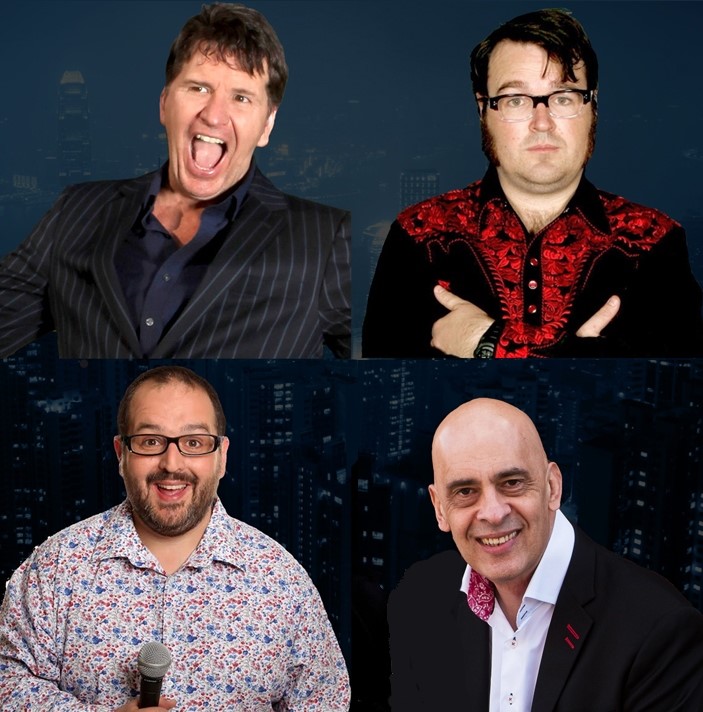 THE All-Star Stand-Up Tour 2017 is back with its best line-up yet featuring Stewart Francis, Jarred Christmas, Mike Gunn and Justin Moorhouse!

This hilarious quartet is coming to St David’s Hall for one night only on Tuesday 2 May, but there has been a late change to the line-up with Mike Gunn replacing Jim Tavaré, who was involved in a near fatal car crash in his Los Angeles last month.

Fortunately, Jim is on the mend after spending 15 days in intensive care. Collapsed lungs and multiple broken bones won’t stop the Essex funnyman though, and he’s already making plans to part of next year’s All-Star Stand-Up Tour.

Deputising for Jim is Mike Gunn, who is a familiar face from Michael McIntyre’s Comedy Roadshow and Al Murray’s Time Gentleman Please as well as his support slots for Lee Mack.

Topping the bill ‘The King of the One-Liner’ Stewart Francis, who brings his deadpan delivery and perfect puns to the Hall once again after a sold out show in 2015.

Sharing the stage with the Canadian comic is the Chortle Award-winning compere Jarred Christmas, who returns as the host. The New Zealander is a favourite amongst the All-Star crowd and is guaranteed to go down a storm.

Plus, there’s the razor-sharp observational wit of Phoenix Nights and 8 Out of 10 Cats star Justin Moorhouse.

If you fancy a laugh, you can’t go wrong with The All-Star Stand-Up Tour 2017!

– The Guardian on Stewart Francis

“One of the funniest men to pick up a microphone”

– Time Out on Jarred Christmas

“Will make you die laughing”

– The Guardian on Mike Gunn

“Simultaneously down to earth and out of this world”

Tickets are £20 (plus an additional £3.95 Ticket Service Charge per transaction and an optional £1 postage fee).

We spoke to the stars of THE ALL-STAR STAND-UP SHOW, ahead of the upcoming UK tour. Here’s what they had to say…

When did you first realise you were funny and did you ever think you could make a career out of it?

Stewart Francis: “I first realised I was funny when I once made my wife laugh so hard she spit milk onto our daughter at the breakfast table. I knew that I couldn’t make a career out of it as my wife, soon after, stopped drinking milk and our daughter moved to Portugal.”

Jarred Christmas: “I had an inkling when I was a teenager. I did a lot of improv comedy at school. Representing my school and playing against other schools. It was like a sport. Then when I was 18 I got dared to try stand up. I had no idea it could be a career. But from day one I was hooked. After my first paid gig I was even more hooked.

Mike Gunn: “I first realised I was funny during my first fraud trial at Snaresbrook Crown Court in the late 80’s when a series of perfectly timed rude gags reduced the judge and jury to gales of laughter. I’m fairly sure this display of comedy talent helped to significantly reduce my sentence. As for a career! Are you crazy? I got in to comedy to avoid having a career in anything and so far it’s working out really well.”

What makes you laugh?

Jarred Christmas: My family. Other comedians. Animals wearing hats. That clip of the dog who can’t catch anything.

Have you ever had a hostile audience?

Stewart Francis: “I once did a gig at the Dignitas Clinic. I didn’t think I’d get out alive.”

Jarred Christmas: Yes. Of course. Sometimes it doesn’t go your way and the audience take it personally. I’ve only once had to escape from a gig, out the back, over a fence into a neighbouring property, through their house, into a waiting car with a police escort out of Wales. That’s what happens when you verbally slam two local gangsters in the audience.

How do you deal with hecklers?

Mike Gunn: “After a barrage of witty put downs I invite them to come home with me and watch a box set of Water Colour Challenge with my aunty Else. They never do it again.”

Jarred Christmas: “So many. All the comics on The All Star Stand-Up Show. It’s going to be so awkward me asking them for autographs every day. I aim to steal their underpants too.”

Has the internet been a good or bad thing for live comedy?

Jarred Christmas: “It’s been a good thing if you embrace it. Things change. The internet has been a big game changer. Just got to go with it.”

Mike Gun: “If I’m totally honest I wasn’t aware there was any comedy on the Internet. Whenever I logon it’s videos of cute cats. Perhaps I need to change my search settings.”

Do you feel the pressure to always be funny? Or can you switch off?

Stewart Francis: “Yes, I do feel the pressure to always be funny, and no, I can’t switch it off. Even as I answer this question, my trousers are at my ankles.”

Jarred Christmas: “People who are naturally funny don’t need to prove it. It just happens. But yeah, I know when not to joke around. Problem is in social situations where you shouldn’t joke is when I want to joke the most.”

Mike Gunn:” Quite the opposite. I spend most of my time sat around the house unwashed in a torpor like state,
muttering week puns under my breath and watching Water Colour Challenge, saving my comedy gold for the stage and the stage alone where I can emerge like a Red Admiral butterfly from a chrysalis and feel truly alive.”

Do you go to many gigs by other comedians? Which are your personal favourites?

Stewart Francis: “I don’t go to many gigs. Hell, I haven’t even been to some of mine.”

Jarred Christmas: “I’m a big fan of stand up. If I get to go and see a mate doing a tour show I do it. I have a family though and I love spending time with them. So on my nights off I’m more likely going to be reading Harry Potter to my kids than going to see a comedian.”

What’s been your career highlight to date?

Jarred Christmas: “So many. Playing Sydney Opera House twice. Answering these questions is up there.”

Mike Gunn: Performing at the London Palladium. It’s a fantastic room and the knowledge of all the greats that have walked that stage before you makes it a memorable experience.”

Intimate clubs or massive arenas – which is best for comedy?

Stewart Francis: “I find intimate arenas best for comedy. Hard to find, but when you do…. heaven.”

Jarred Christmas: “I’m all about the intimacy. You can get that in big theatres like on this tour. Arenas are not intimate. Would I turn an arena gig down on those grounds? No way.”

Mike Gunn: “Intimate clubs are best for comedy. Let’s face it arenas are just about greedy comedians making as much money as possible with the least amount of work in the shortest time with no regard for their loyal fans. It’s disgusting capitalism and represents everything that is wrong with society.”

What/where/who would be your ultimate gig?

Stewart Francis: “My ultimate gig would be watching Justin Moorhouse, Jarred Christmas and Mike Gunn perform in Kettering on a Tuesday night.”

Jarred Christmas: “In the pub across the road from my house with Steve Martin, Les Dawson, Louis Ck with me hosting, plus some of my best comedy mates thrown into the mix.”