The KIDZ BOP UK Kids are launching a search for budding pop stars to join them as virtual support acts on their UK tour this Easter. 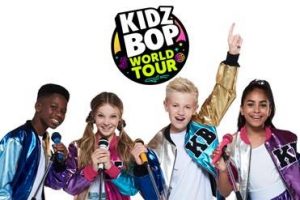 The KIDZ BOP World Tour comes to Cardiff St David’s Hall on Thursday, April 16 – and one lucky dance group will see their own performance premiered at the live show, as well as being in with a chance of performing at the world famous The London Palladium.

KIDZ BOP – the #1 music brand for kids – is searching for new dance talent to join them as part of the UK leg of the KIDZ BOP World Tour in April 2020.

The KIDZ BOP Kids kick off their first-ever UK headline tour this Easter and to celebrate they’re looking for seven virtual support acts who will see their video premiered on the BIG SCREEN at The KIDZ BOP live show. And one lucky act will also get the opportunity to support The KIDZ BOP Kids LIVE on stage at the world-famous The London Palladium.

Dance groups simply have to select their favourite KIDZ BOP song and send in a film of their own choreographed routine / music video performance to be in with a chance of their video being screened before The KIDZ BOP Kids take to the stage at the following venues:

Tickets are on sale now from www.cuffeandtaylor.com

The dance group selected will win six tickets for the KIDZ BOP World Tour date where their routine will be shown.

The British KIDZ BOP Kids, Ashton, Max, Mia and Twinkle – who have sold more than 275,000 albums to date – will bring the interactive live family-friendly concert experience to iconic venues across the UK.

The all-new show features awesome set design, costumes, exciting choreography, and tonnes of cool surprises! Dads even have the chance to show off their best dance moves on stage during the “Daddy Dance Off.”

To see your dance group’s name in lights, and for your performance to be shown on the big screens across the KIDZ BOP World Tour follow these steps:

KIDZ BOP’s new UK album, KIDZ BOP 2020, features popular hits including “Someone You Loved,” “Don’t Call Me Up,” “Wish You Well,” and more.

2019 was an outstanding year for the KIDZ BOP Kids. Supported by national TV and digital advertising campaigns, the KIDZ BOP Kids have appeared and performed on popular kids’ TV and radio shows as well as staple ITV chat shows, Good Morning Britain and Loose Women.