The smelliest places to live in Wales, according to official complaints

Councils receive thousands of smell complaints from residents every year. But where in Wales sees residents complain the most?

To find out, the home fragrance experts at Lifestyle Packaging have asked councils in Wales how many nuisance smell complaints they received from local residents between 2015-2019*.

According to the UK Government, a bad odour is deemed a “statutory nuisance” if it interferes with the use or enjoyment of a home or other premise, or if it injures health. Bad smells are also the third biggest turn-off for homebuyers, behind damp and the property being in a poor state of repair.

In five years, councils in Wales received 5,526 nuisance smell complaints. The prize for Wales’s smelliest place is awarded to Swansea, home to over a quarter of a million people. 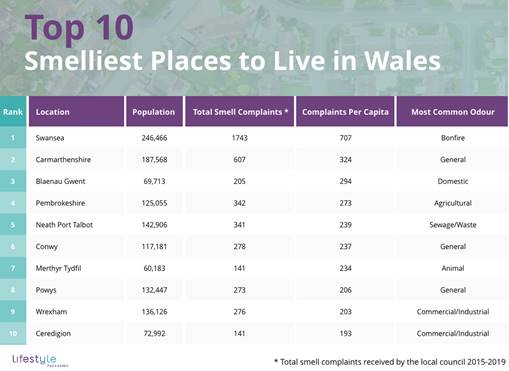 In 2019 alone, 406 Swansea residents complained of unbearable smells, up almost 60 percent from the previous year.

Residents of Swansea were most likely to complain about domestic waste burning – or bonfires. In England and Wales, there is no law against domestic bonfires but it is against the law to cause a nuisance to neighbours.

In second place is Carmarthenshire with 324 nuisance smell complaints per capita in the past five years. That’s one complaint per every 309 residents.

Bad odours reached peak levels in Carmarthenshire in 2016 (144) and have been steadily declining since then. Last year, the council received 106 smell complaints, down 26 percent since 2016 levels.

Blaenau Gwent came in third place, with 294 smell complaints per capita or one complaint per 340 residents. The most-complained about smell in Blaenau Gwent is cannabis, also known as marijuana, the most widely-used illegal drug in Wales.

Two further Southern areas, Pembrokeshire and Neath Port Talbot make up the rest of the top five smelliest places to live in Wales, with 273 complaints and 239 complaints respectively.

Residents in Pembrokeshire, being largely rural, are most likely to complain about pungent agricultural smells, while in Neath Port Talbot, residents are angry over the lingering (and very unpleasant) smell of sewage and waste.

Believe it or not, councils often send out human “sniffers” to assess smell complaints and ask local residents to keep “smell diaries”, recording their perception of the smell and the effect it has on them.

At the other end of the table, Wales’s “best smelling” places to live with the fewest smell complaints per capita are:

Rich Quelch, Global Head of Marketing at Lifestyle Packaging commented on the findings:

“It’s really interesting to see where residents in Wales complain the most about bad smells and the range of complaints councils receive every year. From burnt cabbage in Rhondda Cynon Taf, a hog roast in Torfaen, to cable burning in Cardiff, the list of unusual smell complaints is endless.”

You can find out more about your local area, and its most common smell complaint using this interactive map.