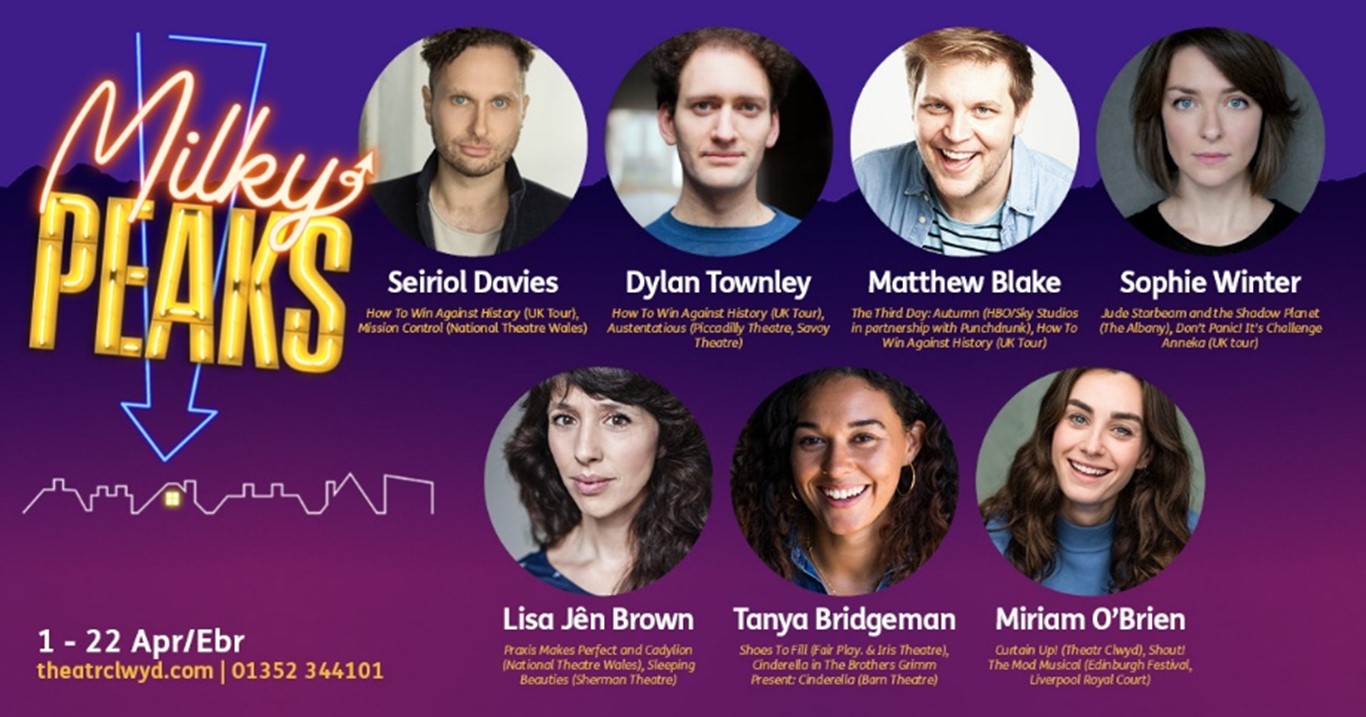 North Wales’ Theatr Clwyd today announced the cast of Seiriol Davies’ brand new musical Milky Peaks. Set in a fictional village in Snowdonia that is nominated for the ‘Britain’s Best Town’ award, this hilarious comedy follows three lost souls and a shabby drag queen as they try to save their community’s heart all while the dark side of the award threatens to blow the community apart.

Milky Peaks is a production by Theatr Clwyd, Áine Flanagan Productions and Seiriol Davies. The show reunites collaborators Matthew Blake, Alex Swift and Dylan Townley who alongside Seiriol Davies and Áine Flanagan Productions co-created the acclaimed, award-winning musical How to Win Against History. Milky Peaks has been recognised by The Stage as one of the best musicals to watch in 2022.

For some, the title Milky Peaks may sound familiar. Back in 2020 the show was in its final rehearsals when the pandemic hit, and the venue was forced to close. It’s a day that Tamara Harvey, Theatr Clwyd’s Artistic Director, remembers well:

I walked into the Theatre with a sinking heart. Our Milky Peaks company were just finishing their sound check – we had to tell them that the Prime Minister had advised everyone in the UK not to go to theatres and so we were sending our team home. They asked to perform the first and last numbers from the show. I sat in the darkened auditorium, laughing and weeping in equal measure at this brilliant show that was suddenly in limbo. It means more than we can say to be bringing it back to life now – the wildly funny and bitingly satirical world that Seiriol Davies and the company created all those months ago feels more vital than ever to share with our audiences here and across Wales.

When asked about returning to the project, writer and performer Seiriol said:

It is surreal and brilliant to be coming back to Theatr Clwyd and to finally be opening Milky Peaks. It feels gorgeous and right to be telling this dark, sparkly, stupid-ferocious fable about our crazy world, which has not in any way de-crazied in the last two years. The creative team is on fire (not literally), the cast is also on fire (literally: it’s a rehearsal technique): EVERYTHING is in place.
Come on, Milky Peaks!