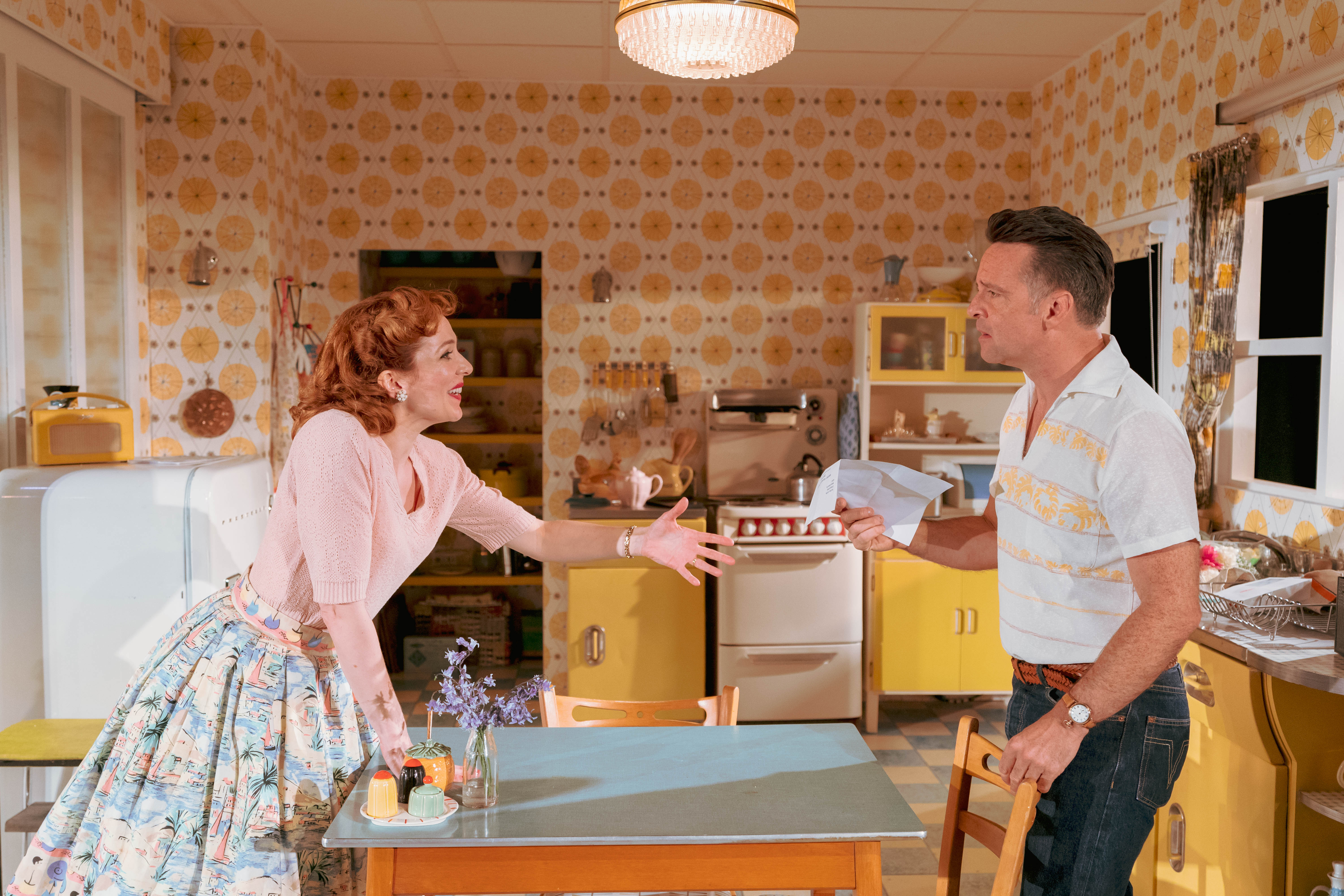 Theatr Clwyd will go for gold at the UK Theatre Awards this week (Sunday 14 October) in a bid to take home three highly-esteemed awards.

Nominated for Best New Play, Best Musical Production and The Renee Stepham Award for Best Presentation of Touring Theatre, Theatr Clwyd will fly the flag for Wales as it goes up against some of the UK’s most acclaimed theatre production companies.

Up for Best New Play at the UK Theatre Awards, against three other high-profile nominees, is Home, I’m Darling by Laura Wade — a Theatr Clwyd and National Theatre co-production about sex, cake and the quest to be the perfect 1950s housewife.

Directed by Tamara Harvey and starring Wales’ very own Richard Harrington (Hinterland) and Sara Gregory, alongside Katherine Parkinson (The IT Crowd, Humans), the play was the first National Theatre co-production to premiere outside London — playing to sell-out audiences at Theatr Clwyd’s Emlyn Williams Theatre in Mold this July.

Meanwhile, critically acclaimed musical The Assassination of Katie Hopkins, written by Chris Bush and Matt Winkworth, with musical supervision by David White and musical direction by Jordan Li — who both hail from Wrexham — is nominated for the title of Best Musical Production at the UK Theatre Awards. Plus, Welsh actor Bethzienna Williams made her professional stage début in one of the lead roles.

The original show, which was staged at Theatr Clwyd in April and May this year, explores truth, celebrity and public outrage as it sets the scene of a shocking crime that divides the nation.

Finally, Theatr Clwyd’s production of A Streetcar Named Desire — produced in collaboration with Nuffield Southampton Theatres and English Touring Theatre — is up against two other UK nominees for the Renee Stepham Award for Best Presentation of Touring Theatre.

Tamara Harvey, Artistic Director at Theatr Clwyd and director of Home, I’m Darling said: “Something important is happening here in our hilltop home in north Wales – the work we began when Liam and I took the helm is beginning to bear fruit, and this spring we took the leap to stage a brand new musical and a brand new play. The risk paid off, and we were rewarded by enthusiastic and supportive audiences.

“Very different shows in both tone and content but both brilliantly entertaining, whilst asking big questions of our society. Both were built by our highly skilled in-house teams at Theatr Clwyd (Home, I’m Darling in collaboration with the team at the National Theatre) – set building, painting, costume making and props creating – it’s an increasing rarity to have skills like these in-house. Both involved talented and inspiring Welsh artists at the heart of the creative teams and casts, and both are now being recognised nationally. We couldn’t be more proud of everyone involved.”

The winners will be announced at London’s historic Guildhall on 14 October, in a glittering ceremony hosted by Olivier-nominated musical theatre performer Tyrone Huntley.

The UK Theatre Awards, with a wide range of sector-specific category awards on offer, is the only nationwide awards to honour and celebrate outstanding achievements in regional theatre throughout England, Scotland, Wales and Northern Ireland.

Showcasing the wealth of theatrical talent that the UK has to offer, the list of 49 impressive finalists for 2018 features nominees from across the UK — with Wales being represented by candidates including Theatr Clwyd, National Dance Company Wales and Seiriol Davies.

The National Dance Company Wales is nominated for the Achievement in Dance Award and Seiriol Davies — a north Wales actor, playwright and composer who has recently been originating his new musical Milky Peaks in the rehearsal room at Theatr Clwyd — is nominated for Best Performance in a Musical for How To Win Against History — a hit at the Edinburgh Festival, in London and on tour.

Plus, Emma Jordan — another member of the Theatr Clwyd family who directed the Theatr Clwyd and Sherman Theatre co-production of William Golding’s Lord of The Flies, currently playing at Theatr Clwyd — is nominated in the Best Director category for Lovers: Winners and Losers at the Lyric Theatre, Belfast.

Since 1976, Theatr Clwyd has established itself as a world-class theatrical powerhouse and much-loved establishment within its community, offering a wealth of visual arts — from film to music and comedy.

Through a variety of projects, classes and initiatives, the critically-acclaimed arts centre has worked extensively to engage people of all ages and backgrounds with creative activities, from drama workshops for people with additional learning needs to vocal sessions for those with chronic lung conditions.

This outstanding dedication to the local area has not gone unnoticed, with Theatr Clwyd becoming the proud recipient of a YDCW / CPRW Post Office community award earlier this month, presented live on S4C.

Executive Director at Theatr Clwyd, Liam Evans-Ford said: “We are very proud of the impact we have made this year both individually and through partnership work — where theatre made in north east Wales has been shared and discussed both nationally and internationally.

“Our new musical The Assassination of Katie Hopkins gained major press coverage across the UK and was even debated on talk shows in the US. Our new production of Home, I’m Darling was given its world premiere here in north Wales before transferring to The National Theatre on the South Bank in London — the first time in their history a co-production has been ‘given to them’ as a partner rather than the other way around.

“We are very proud to be making new, exciting theatre that is now regarded as world-class, in addition to the impact we make to our local communities and the economy in north east Wales.”

Or, for further information about the UK Theatre Awards visit www.uktheatre.org.