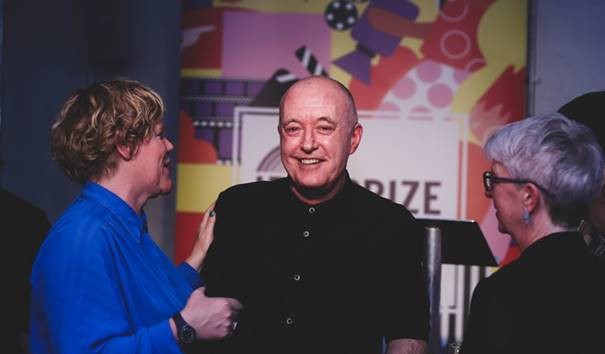 Tom Abell, Managing Director and owner of Peccadillo Pictures, has been presented with the inaugural Iris Prize Fellowship. Honouring those who have made a significant contribution to the LGBT+ film industry, the fellowship recognises Tom’s services to LGBT+ film distribution in the UK.

Directors, actors, producers, industry professionals and LGBT+ activists gathered at the Ministry in London to congratulate the much-loved LGBT+ champion

Over the past 40 years, Tom’s commitment to sharing LGBT+ cinema has brought hundreds of films to UK screens, including Skin Flicks, Head On, The Watermelon Woman, Weekend, and recent hit Sauvage which played at Iris Prize last year.

The fellowship was presented by Lord Glendonbrook (former Chair of Channel 4) as patron of the Iris Prize LGBT+ Film Festival at the Ministry, a private members club and workspace for the creative industries, during the Cardiff-based festival’s annual London Reception.

Andrew Pierce, Iris Prize Chair, commented:
“Actors, directors, producers are already recognised time and time again for their contribution to the world of film. It was obvious to us at Team Iris that the only person on our shortlist for this inaugural Iris Fellowship was Tom Abell.

In today’s multi-platform world where content is available freely, it is timely to remember when this was not the case. Tom Abell was one of the pioneers, you could say ahead of his time, creating an audience and business model working in a system which was sometimes hostile.

More recently when we created the Iris Prize to support new LGBT+ film making talent, it was Tom who enthusiastically supported the inaugural Iris Prize Festival back in 2007. Peccadillo has distributed about 50% of the films shortlisted for the Iris Prize with their popular Boys on Film collections.”

In accepting the award, Abell spoke also of the challenges facing an LGBT distributor, even in the UK today, lamenting hostile social media comments directed at current Peccadillo release A Deal With The Universe, Jason Barker’s documentary about his own experiences as a trans man putting his gender reassignment on hold in order to carry and give birth to a baby.

“There are moments in life when you come across a person and think, he’s a really nice man. Tom Abell is one of those people! But he is much more than just a nice man. Britain would be a very different place today without his commitment to sharing LGBT+ films. His commitment over four decades at the helm of companies like Dangerous to Know, Millivres Multimedia and Peccadillo Picture, who will shortly be celebrating their 19th birthday. He has influenced generations of movie-goers by distributing and sometimes financing LGBT+ films.

I’m confident there must be thousands of LGBT+ people across the UK who have been emotionally nourished with his films. The back catalogue of titles holds a mirror to our lives, confirming we are alive and exist in many complex ways, in communities across the world, celebrating happy and sad times.”