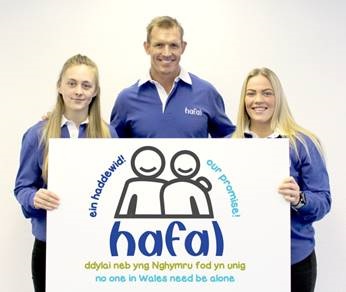 Welsh charity Hafal will launch a new national service to combat loneliness and isolation at an event in the Principality Stadium on 15th May 2019.

Hafal research shows that a high percentage of people in the Charity’s client group experience loneliness and isolation. Hafal Members think this is unacceptable.

In a bid to tackle this considerable issue, Hafal is promising that when those in its client group seek the Charity’s help, Hafal’s services will provide lasting friendly contact through membership, an online community, by email, social media, on the phone, or in person.

Promise Ambassador Dafydd James, a former Wales and British Lions player who has recently spoken about his own mental health, said: “This year I will lead the campaign to raise awareness of Hafal’s Promise across the 22 counties of Wales, ensuring that people who experience loneliness and isolation know that they are not alone.

“We want to change the lives of key groups across Wales who are vulnerable to loneliness and isolation, particularly those affected by a mental illness.”

Hafal Member Richard Timm said: “When you are affected by an illness or caring for someone with a disability you can often feel like there is no-one to turn to. A number of factors can see you becoming lonely and isolated – you may not be in work, your caring duties may take up all your time, or you may find it difficult to find opportunities to connect with others. This can result in feelings of loneliness and isolation, which can be debilitating.

“Hafal’s Promise to those people is that they will no longer be alone. Hafal will be there for you.
This is a vital service which will make a big difference to many people’s lives. Just to know that there is someone there who you can depend on, or even on the end of a phone or in a chat room, is so important.”

Hafal’s Chief Executive Alun Thomas said: “Our Campaign is timely because the Welsh Government will announce its own new strategy on tackling loneliness and isolation later this year. The Welsh Government has announced that the strategy ‘will include a number of cross-cutting policies to benefit all of society, alongside more tailored interventions that can support people when they are at greater risk due to specific trigger points in their life’.

“We welcome the Welsh Government’s commitment to address loneliness and isolation – but we need to make sure that priority is given to those with the highest need – people for whom the Welsh Government, the NHS, local authorities and other providers have a direct responsibility through vital health and social care services.”

The event at the Principality Stadium will see Hafal Members from across Wales coming together with politicians, policy makers, healthcare professionals and sports stars to celebrate the launch of Hafal’s Promise. Guests will be able to find out about the Promise and learn about Hafal’s work across Wales to combat loneliness and isolation.