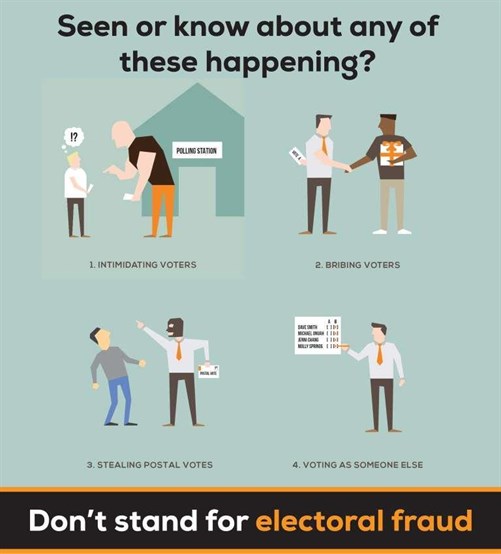 Independent charity Crimestoppers and the Electoral Commission are calling on the public to be aware of the threat of electoral fraud, as the UK prepares for a General Election on Thursday 8 June.

The three-week campaign, which launched on the 1 June, highlights the tell-tale signs of electoral fraud. This includes intimidating or bribing voters, stealing postal or proxy votes, voting as someone else, tampering with ballot papers or postal ballot packs, or asking someone to reveal their marked ballot paper.

During 2016, police forces across the UK recorded a total of 260 alleged electoral fraud allegations. This resulted in 2 convictions and 6 people being cautioned.

Mark Hallas, CEO of charity Crimestoppers, said: “Electoral fraud damages the UK’s tradition of free and fair elections, which is respected across the world. Incidents of people trying to unduly or illegally influence or rig the outcome of a ballot – or simply not playing by the rules – undermines the public’s trust and is a crime, which is why our independent charity is here to take information on electoral fraud anonymously.

“To ensure the election is conducted to the highest standards, Crimestoppers is working closely with the Electoral Commission and police who take voting offences extremely seriously. Anyone with information can contact us 100% anonymously on 0800 555 111 or use our non-traceable online form at Crimestoppers-uk.org”

Crimestoppers and the Electoral Commission have been working together since 2015 when they joined forces to raise public awareness and encourage people to report their suspicions at the General Election.

Tom Hawthorn, Head of Policy for the Electoral Commission, said: “It is important that when voters go to the polls on 8 June, they are confident the police and prosecuting authorities take allegations of electoral fraud seriously. Significant sentences will be imposed when electoral law is broken, and those responsible for electoral fraud can face jail. We are pleased to be working in partnership with Crimestoppers to raise public awareness of this.

“Voters should be confident that they can report any concerns about electoral fraud. Anyone who has evidence that an electoral offence has been committed should contact the police immediately or report it anonymously through the Crimestoppers website or 0800 555 111”

The campaign includes a schedule of posts on Facebook and Twitter designed to improve the public’s understanding of what constitutes electoral fraud and offer available options in terms of reporting any concerns. Returning Officers across the United Kingdom will also be provided with campaign posters to be positioned in polling station on the day of the election.

Electoral fraud can be reported anonymously to Crimestoppers through the charity’s 0800 555 111 number or Anonymous Online Form at Crimestoppers-uk.org