Wales’ largest careers event is on the lookout for aspiring young tv presenters.

The hunt for aspiring TV presenters, radio DJs and vloggers is on, as young people across Wales are encouraged to apply to become the face of SkillsCymru.

SkillsCymru is Wales’ largest annual series of careers, skills, jobs and apprenticeship events and will return to Llandudno and Cardiff in October 2017.

The organisers are on the lookout for north and south Wales presenters who will be followed by a film crew as they explore the event interviewing exhibitors and visitors.

In 2010, Michelle Owen became the first Face of SkillsCymru while studying at Swansea University. Michelle is now a successful TV and radio presenter and credits some of her success to the experience at SkillsCymru. She said: “When I found out I had won I couldn’t believe it, I was only 20 at the time and felt very nervous at the prospect of speaking to thousands of people.

“Presenting at SkillsCymru gave me much more confidence in front of the camera and interacting with all sorts of people from service men and women, to members of the public and even celebrities.

“I now present on TV for Sky Sports and on the radio for Capital FM. The experience I gained in those few days has certainly helped me on my path to where I am now.” 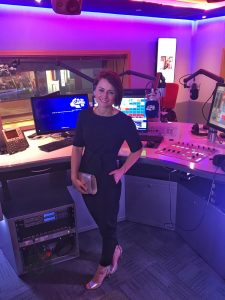 Skills and Science Minister, Julie James, said: “This is a fantastic and quite unique learning opportunity for anyone interested in pursuing a career in the media sphere and I would strongly encourage anyone who is eligible to apply.

“Not only will the successful candidate have the chance to build new contacts across the industry and learn more about what it is like to be a presenter, but they will also develop transferable skills including confidence building and interpersonal skills which will be useful in any career.”

The presenters could be an apprentice, in school, college, university or undertaking work-based training, but will ultimately have a passion for broadcast media. The overall winners will be supported by a professional camera crew, and will gain unique experience interacting with lots of different people on camera.

Young people aged 16-25 can apply and must submit a 60 second video clip explaining why they should be the face of SkillsCymru. Videos can be in English, Welsh or both.

The entries will be judged by a panel made up of media professionals and PR experts. Winners will be chosen to cover both events in Llandudno and Cardiff.

The deadline to enter the competition is Friday 4 August 2017 and the winners will be notified by the end of August.

To enter, applicants must email their details to emily.worthington@prospects.co.uk and then upload their video here:

SkillsCymru is organised by Prospects with support from the Welsh Government and the European Social Fund.

For more information on the event, visit: