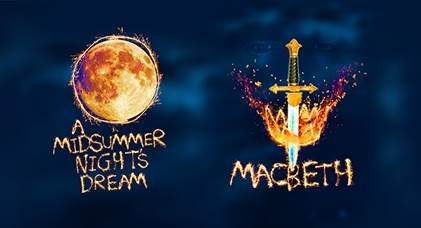 The stunning Macbeth opened in Cardiff this evening, delighting the audience with breath-taking acting, played out on a cleverly designed set with eyecatching lighting and perfectly timed sound effects. The stage set of a castle was incredibly detailed with forest panels to both sides of the stage; the use of music was intriguing as a concept and in practice, was the perfect companion to the dialogue enhancing the performance.

All the cast members gave outstanding and mesmerising performances, as the passionate story unfolded. Macbeth as a story can be heavy and dark, and one thing that was pleasant to see was the amount of passion inserted into the performance between Macbeth and Lady Macbeth, the kissing scenes were as one audience member put it ‘almost audible’.

Lady Macbeth, played by Emma Mcdonald, gave an emotional performance with passion and conviction every second she was on stage, whilst Macbeth, played by Billy Postlewaite, played his part perfectly taking us on a rollercoaster of emotion.

The combined efforts of all involved make this play an experience in which the audience was lost in and on the edge of their seats for the entire performance.

The sound effects are perfectly timed to provide realism to the fight scenes, teamed with light effects that can make castle walls bleed or become part of the forest. The music is in the form of familiar songs like Paint It Black by The Rolling Stones and The House of The Rising Sun By The Animals.

This show will amaze and astound, taking your theatre experience to a whole new level. The Watermill Team and ensemble have created a show which uses all the elements of theatre production to wonderfully blend the traditional and modern throughout the performance, making it unique and timeless.

Macbeth is at New Theatre until 12 October as part of The Watermill Theatre Presents double bill alongside A Midsummer Night’s Dream.

Tickets and information available from: www.newtheatrecardiff.co.uk