•   This is the worst performance since January 2015 and significantly below the UK average of -1.0%.

Wehrle said: ‘’Footfall trends in Wales contrast with those for the UK with a downward trend across all of the three destination types.  Whilst footfall in retail parks across the UK has risen for 17 consecutive months and increased by an average of 2.2 per cent, in Wales footfall in retail parks declined by an average of 1.5 per cent over the same period, and has dropped continuously for the past eight months

‘’This relative strength is undoubtedly a function of owner driven change that has led to the introduction of a family based leisure offer in many out of town locations that previously fulfilled a purely functional role.  This, in combination with plentiful and free car parking has enhanced the attraction of retail parks and improved their efficiency as click and collect locations for the ever increasing number of omni-channel shoppers. The high cost of parking in high streets and shopping centres, together with elongated travel times due to congestion means that urban destinations are at an obvious and increasing disadvantage.” 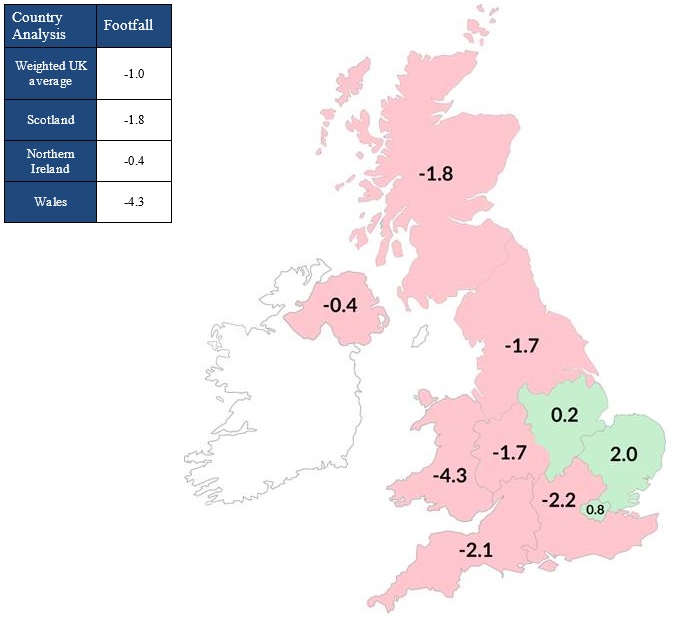 David Lonsdale, Interim Head of the Welsh Retail Consortium, said: “Shopper footfall in Wales shrivelled further in May, and at its fastest rate since January. Footfall has now fallen on Welsh high streets and shopping destinations for sixteen consecutive months. That said, we have to bear in mind that retailers are increasingly adept at harnessing the internet and multi-channel innovations to get through to consumers who might not have time or inclination to travel to the shops.

“Despite the growth in pay outstripping inflation, shoppers undoubtedly remain cautious. That’s why we are looking to the Chancellor to use his upcoming Summer Budget to prioritise measures which bolster disposable incomes and consumer confidence.”