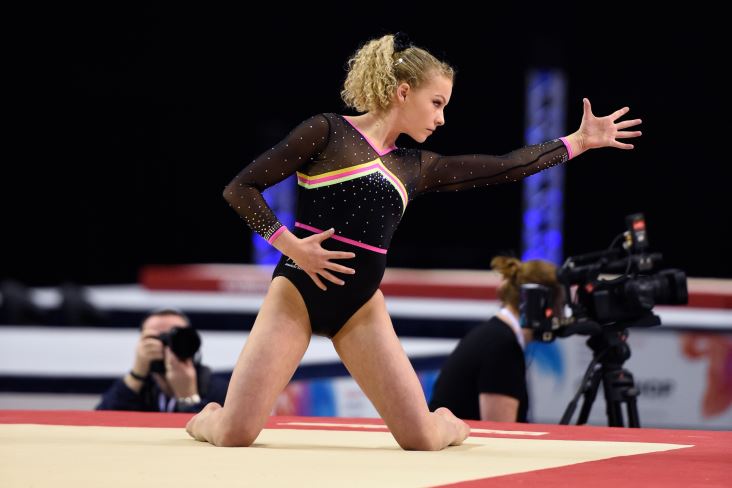 With just over a year to go until the Gold Coast Commonwealth Games kicks off, Welsh gymnasts struck gold at the British Championships in Liverpool this weekend (March 25th and 26th).

Pontypool’s Maisie Methuen, who trains with Phoenix Gymnastics, came away with a gold on the floor, beating 2016’s all-round British Champion and Olympian Claudia Fragapane. Her gold was even more impressive as this was 15-year-old’s Maisie’s first competition as a senior.  She also won a silver in the all-around competition.

Sixteen-year-old Latalia Bevan from Merthyr Tydfil. who trains at St Tydfil’s Gymnastics Club, came away with a silver on beam. Again, a great achievement for Latalia as this is her first senior competition.

Holly Jones from Swansea, who trains at Swansea Gymnastics Centre, scooped the silver in vault. This was also the first year 16-year-old Holly has competed in a senior competition.

In the men’s competition, twenty-year-old Jac Davies from Carmarthen, who trains at Swansea Gymnastics Centre, took gold in the pommel horse – and because of his success he was invited to compete in the Men’s Masters Competition. The Masters is a contest where gymnasts with the top eight scores across all age groups compete against each other. Jac came fourth in the Masters.

Barry’s Josh Cook was also invited to compete in the Masters floor competition. The sixteen-year-old Barry YMCA gymnast was competing in the under 18s age group and so it was a great result for him to be invited to contest the Masters and challenge the senior gymnasts.

Welsh gymnasts also swept the medal boards in the Junior competition. Fifteen-year-old Jolie Ruckley from Cardiff, who trains with Cardiff Olympic, took home bronze medals in all-around, uneven bars, beam and floor after being out with an injury for over a year. While fifteen-year-old Zoe Simmons who lives in Somerset, but competes for Wales, won silver in the Junior floor competition and bronze in the vault.

Chief Executive of Welsh Gymnastics, Rhian Gibson, said: “It was an amazing weekend for our Welsh gymnasts. To see so many bring home medals against some of the UK’s best gymnasts was wonderful.

“It was even better as we are nearly a year to go until the Commonwealth Games in the Gold Coast and so it is a really promising start to our preparations for the games.”

Rhian added: “As well as the medal winners we also had a lot of our gymnasts get through to apparatus finals and so it was a great weekend for Welsh Gymnastics and is shows how much our sport has achieved in the last few years. We can’t wait until Gold Coast 2018.”