Welsh Language Apps Inspiring the Next Generation of Cornish Speakers 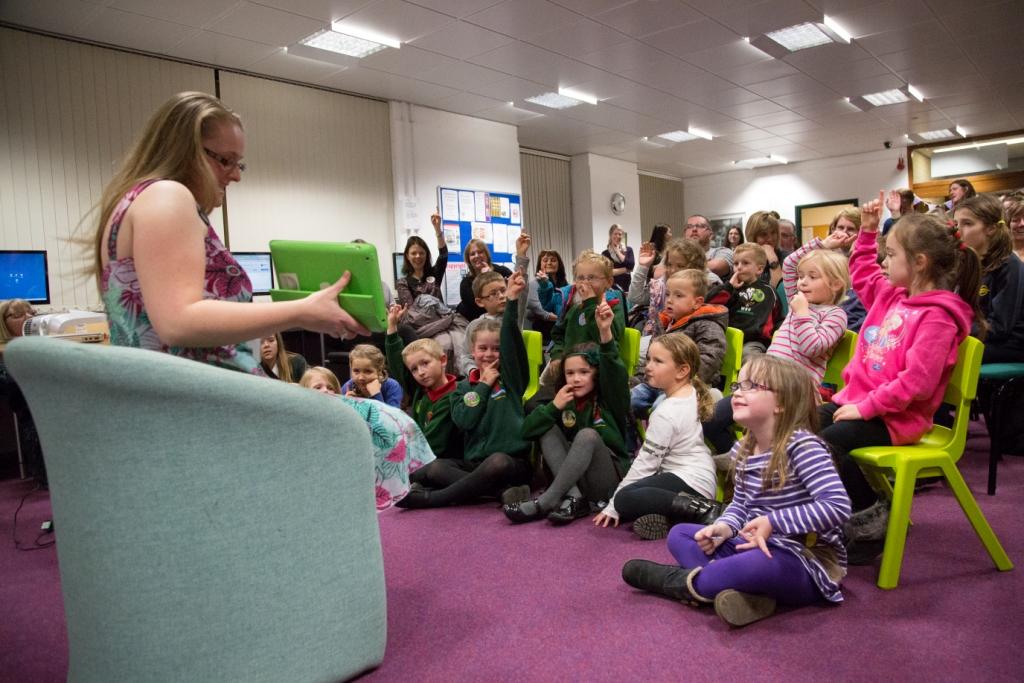 An award winning series of apps to help families learn Welsh is now inspiring the next generation of Cornish speakers get off to a flying start.

The National Lottery funded Magi Ann Welsh Language apps were launched in 2016 with the aim of helping young children and their families learn Welsh. The apps, which are the brainchild of Menter Iaith Fflint a Wrecsam in north east Wales, is the inspiration behind a new Cornish equivalent launched in Truro, Cornwall today (Thursday January 31st 11am – 12pm at Truro Bust Station, Lemon Quay).

A direct result of a partnership they forged with Menter Iaith Fflint a Wrecsam at the 2017 National Lottery Awards in London, Cornish cultural trailblazers, Golden Tree Productions, will be unveiling a new Magi Ann Kernewek (Cornish) app this morning.

The Cornish version goes by the same name as its Celtic cousin and contains 12 simple stories to help the next generation of Cornish speakers. Today’s unveiling in Cornwall forms part of the wider launch of ‘Go Cornish’ https://gocornish.org/ , a new online resource from Golden Tree Productions for learning and teaching the Cornish language. The team behind the Welsh version from Menter Iaith Fflint a Wrecsam will be joining today’s celebrations in Cornwall, as will the app’s main cartoon character – Magi Ann.

The Magi Ann apps bring to life a series of traditional Welsh language books of the same name which were originally penned by Flintshire teacher and author, Menna Evans. The animated interactive apps allow parents to tap on a word to find out how to pronounce it, as well as displaying the English translation.

The Welsh app, which is also celebrating smashing through the quarter of a million downloads barrier this month, was voted as the UK’s Best Education Project at the 2017 National Lottery Awards – the annual search for the UK’s favourite National Lottery-funded good causes. The Welsh Magi Ann app has been downloaded in countries as far away as America, Argentina, China and Japan. Menter Iaith Fflint a Wrecsam have also received expressions of interest from other minority language groups across Europe who are looking at the potential of developing similar Magi Ann apps.

It was during the 2017 National Lottery Awards in London that the idea of creating a Cornish version of Magi Ann was forged. It was here that the winning team in the Education category from Menter Iaith Fflint a Wrecsam met up with the team victorious team from Cornwall behind the Man Engine (the largest touring mechanical puppet ever built in Britain) which scooped up the UK’s Best Arts project at the ceremony.

As Rhian Davies, the Communications Officer for Menter Iaith Fflint a Wrecsam, recalls: “During the Awards, we got to know the Man Engine’s creator Will Coleman and his team from Golden Tree Productions who were behind the project. We got on really well and Will explained that he spoke Cornish. After the Awards, and as you do as fellow Celts, we were all up late dancing and singing songs together in Cornish and Welsh. We realised that we had a lot in common and that’s when the concept of creating a Kernewek (Cornish) Magi Ann app came into fruition. Things developed swiftly from there and we have since had expressions of interest from other places in Europe such as Brittany in northern France about developing a Breton language version of the app. The sky’s the limit really with regards to how far Magi Ann can go to inspire people to maintain and preserve minority languages.”

Will Coleman, the Artistic Director for Golden Tree Productions, said: “It has been a pleasure working with the Magi Ann team to create the Cornish Magi Ann Kernewek app, for pre-school, nursery and family learning. We are very grateful to the National Lottery for making this relationship possible, and along with our new Go Cornish website (gocornish.org), this app is already inspiring the next generation of Cornish language learners.”

Menter Iaith Fflint a Wrecsam is one of a network of 22 language initiatives who work to increase and strengthen the use of Welsh in our communities across Wales.

Lowri Jones, Chair of Mentrau Iaith Cymru, says: “We are very pleased to see an app produced by a local Menter Iaith being developed and used to promote another minority language. The success of the Magi Ann apps demonstrates the power of technology in developing bilingualism at home. It also recognises the hard work of the Menter Iaith that identified the need in the local community. Recognising and answering communities’ needs underpins the work of the local language initiatives in increasing and strengthening the use of Welsh in our communities.”

The Director of the National Lottery Community Fund in Wales, John Rose, said: “By supporting the development of the Magi Ann app, National Lottery funding has enabled parents and children in Wales and further afield to enjoy learning Welsh together. It’s fantastic to see that this award winning project is now supporting other minority languages and is inspiring the next generation of Cornish speakers. This project truly is a prime example of how small amounts of money can make a really big difference.”