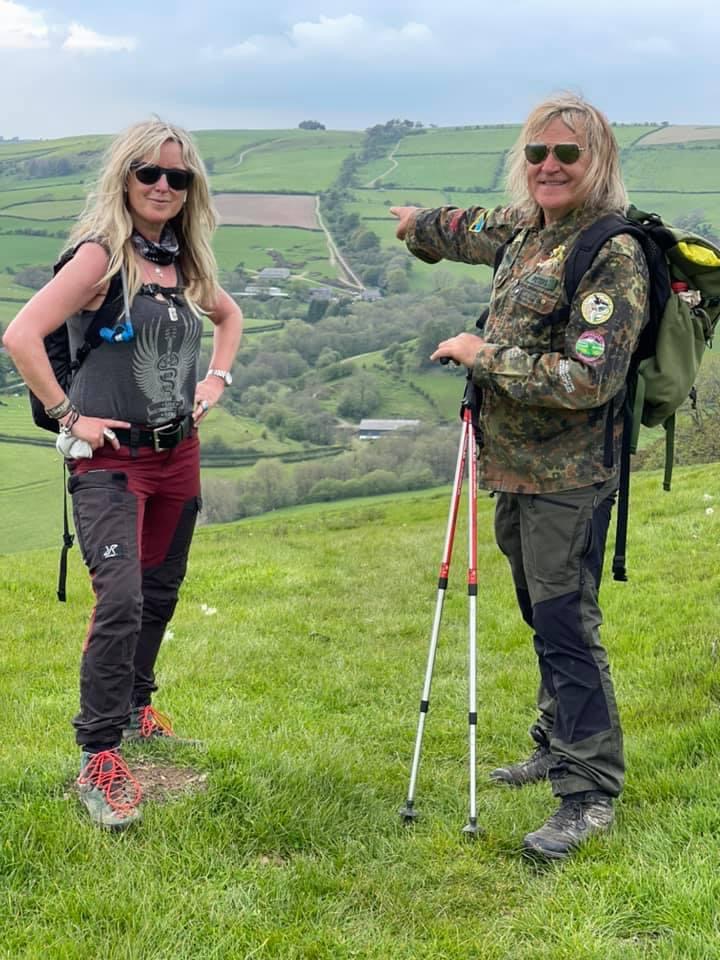 Mike Peters, frontman of legendary Welsh rock band The Alarm, and his wife & fellow band member Jules, are walking the length of Wales (from Prestatyn to Chepstow) to raise money for cancer patients this week.

The musicians, from Dyserth in North Wales, had originally planned to take on the 177 mile, 12 day challenge with a group of other hikers, but Covid-19 restrictions prevented them from doing that. Undeterred, the dynamic duo decided to go it alone, and instead invited the other hikers (who hail from across Europe and the USA) to join them virtually. The 60 virtual hikers have set themselves different targets, with some trekking the 177 miles near their own homes, and others walking 10,000 steps a day for 12 days in their own neighbourhoods. The group are collectively walking 10 million steps as part of the ‘Offa’s Dyke Rocks Virtual Hike’ and the challenge has already raised over £14,500 for the charity Mike and Jules co-founded, the Love Hope Strength Foundation.

Mike, 62, who was diagnosed with chronic lymphocytic leukaemia over 15 years ago, says:

“Over the years, we’ve organised hikes across the globe, including to Everest base camp, Kilimanjaro, Machu Picchu, Mount Fuji, the Grand Canyon, Iceland and Scotland, and we have annual treks in Snowdonia. We’ve always wanted to hike Offa’s Dyke, but I didn’t realise it was going to be this tough. We’ve walked through all weathers so far, and have enjoyed some really picturesque scenery.

“We are so lucky to have the Offa’s Dyke trail on our doorstep! I’ve loved all the treks I’ve done, but this one is definitely the most difficult, and it’s certainly special. There’s no place like home!”

Half of the money raised through this challenge will support NHS cancer services in Wales as well as specialist cancer centres in other parts of the UK & USA. The other half will support the partner organisations that Mike and Jules work closely with through their Foundation: the blood cancer charity DKMS, the Union for International Cancer Control, the World Cancer Research Fund and the Children’s Cancer Unit in the Muhimbili Hospital in Tanzania.

“It’s strange not doing the trek with other people, but we’re all connecting regularly online to support each other, so the camaraderie that’s so crucial in challenges like these is still there. Together, we’re walking 10 million steps, which is a step for every person around the world that will have been diagnosed with cancer since New Year’s Day. The steps we’re taking should help make a real difference for people affected by cancer now and in the future. We’re funding new equipment and supporting training and education for healthcare professionals in underprivileged communities.

“I hope that we are also collectively inspiring others to ‘walk and talk’ and get active. We know that keeping active can help you lose weight or keep a healthy weight, which reduces the risk of 13 different types of cancer. And if you’re exercising a lot, it can help prevent breast and bowel cancer. Being in the outdoors and taking exercise can really help our mental health. This Offa’s Dyke hike is challenging even if you’re fit, but the whole experience has been wonderful.”

Jules Peters was diagnosed with breast cancer in 2016 and has gone on to set up a support group, ‘The Breast Cancer Birds’. Andrea Davies-Tuthill, who is a member of this support group, and her husband Gwynne Tuthill are taking part in the virtual hike. Andrea underwent surgery this month as part of her cancer treatment so they walking short distances in the Brecon Beacons, near where they live in south Wales.

“I am so proud of the way my wife has come through this. She has battled hard and is on the road to recovery. The support group set up by Jules Peters has been a huge source of inspiration and really helped Andrea through this whole experience. It’s been great to be part of this virtual challenge, setting ourselves a goal, and being able to enjoy the music as well as the great outdoors.”

Some of the walkers have been inspired to join in because of the message of ‘love hope and strength’ that underpins the activity. Johnny Jackson from Y Felinheli, Gwynedd, spent six weeks in intensive care in late 2019 following complications after hip replacement surgery. Johnny has been shielding since March last year, and taking part in the Offa’s Dyke Virtual Hike is the first time he’s been out of his village for over a year.

Johnny, 69, explains why he and his wife Marianne are taking part in the virtual challenge:

“Mike’s story, and seeing how he and Jules have stayed so positive during their health issues, has helped me stay focussed whilst I’ve been unwell. He’s inspired me to take up writing music and playing my guitar. It’s been like my therapy.

“This challenge has given me something to aim for, and Mike’s phrase ‘Music will keep us strong’ has really resonated with me. Mike has been sharing two songs a day with us trekkers and I’ve joined him. Marianne has been filming me as we’ve done our own ‘Lighthouse Rocks’ walks to coincide with Mike and Jules’ Hike. She and I have had a lot of fun, thanks to this walk.

“Cancer is something that affects everyone. My mum who is now 94 had breast cancer and my father had leukaemia. It’s great to know the money Marianne and I are raising is supporting others with a cancer diagnosis, but I am personally benefitting from getting out and from being part of this virtual group too.”

You can support the Offa’s Dyke Rocks Hike here: https://www.justgiving.com/campaign/offasdykerocks and enjoy all the music from the hike for free at www.thealarmcentral.com