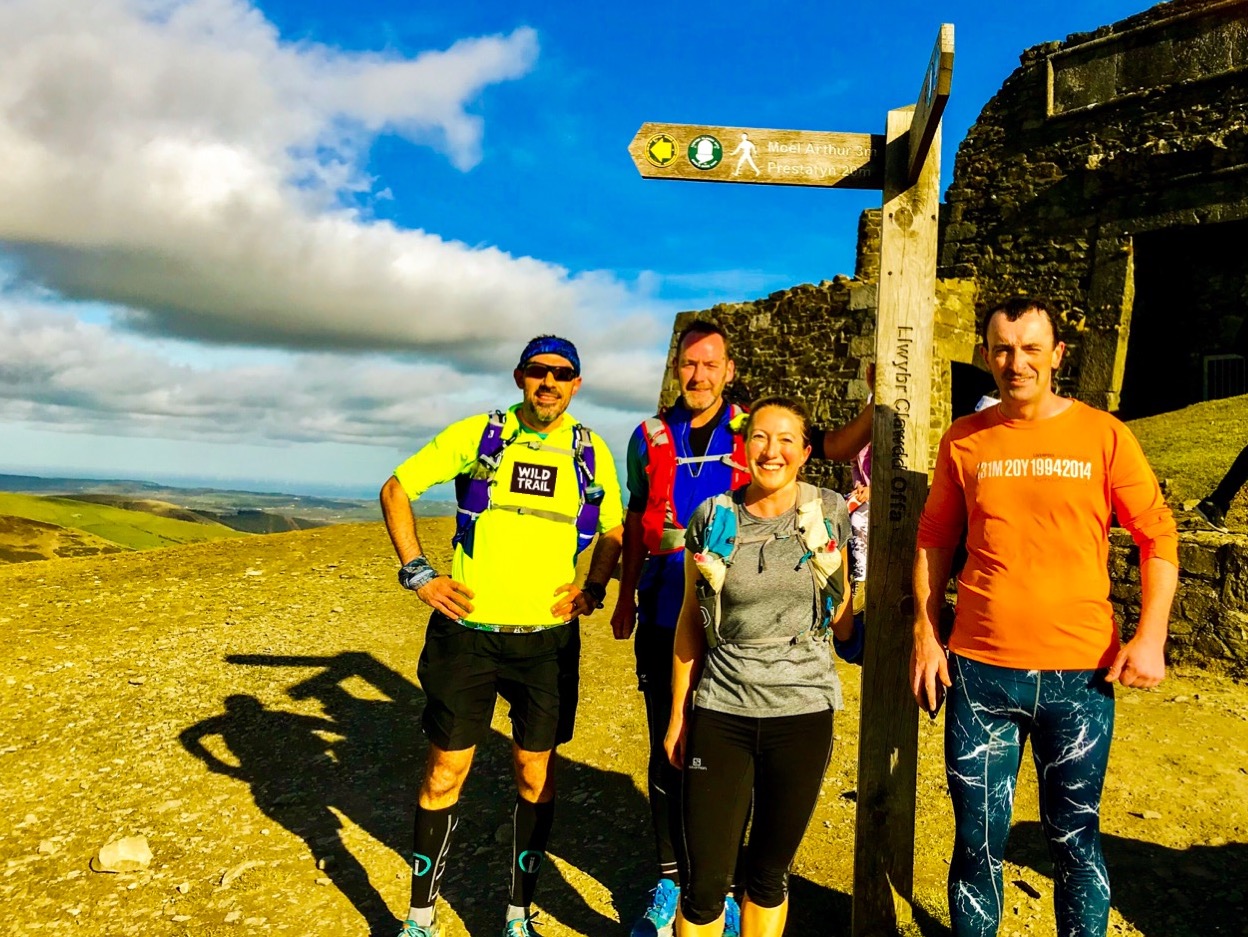 Four runners from North Wales will aim to break the fastest known time for the Offa’s Dyke Path this March to help raise funds for Wales Air Ambulance. Welsh snack brand Wild Trail, based in Tywyn (Gwynedd) and with offices in Monmouth, will be fuelling the runners with its natural energy bars.

The runners will start at the south point of the Offa’s Dyke Path near Chepstow on Friday 22 March, running 177 miles on their ultra trail marathon to reach the finish point in Prestatyn on Sunday 24 March.

The current fastest known time to complete the Trail is 64 hours 10 minutes and was set by Michael Wood in July 2012. The runners will have to break for short sleeps at two points through the race, but will aim to maximise their running time to give themselves the best chance of beating Michael Wood’s time.

Welsh snack brand Wild Trail, part of Tywyn-based Brighter Foods, is helping the runners and support team by supplying its energy bars for both the training period and challenge itself.

As well as their aim to raise funds for the Wales Air Ambulance, each of the runners has their own personal reason for tackling the challenge.

Jason Harper, who is also the race director for the Cybi Coastal Marathon, said: “I’ve only been running for just over four years. In 2009, I was told that I would be disabled after an emergency operation on my spine and after suffering nerve damage. After committing to physio to aid my recovery I then took up running and haven’t looked back. I have two ultra marathons under my belt, both with top 20 positions. It’s great to have a Welsh brand like Wild Trail supporting us and we’re proud to be raising funds for a great charity in the Wales Air Ambulance.”

Commenting on his reasons for taking on the challenge, French teacher and chef Laurent Gorce said: “I started running three years ago after a friend of mine, of a similar age, was taken away by cancer. It made me realise that life is short and that it’s important to try and achieve and experience new things. As well as being a chef and a teacher, I’m also a running guide and coach so this felt like a challenge that would play to my strengths but also push me. I did a ‘couch to ultra challenge’ in 11 months and have achieved a top ten finish in my toughest two races. As this is a run across Wales, it’s fantastic to have the support of a Welsh brand in Wild Trail and to be raising money for the Wales Air Ambulance. Hopefully people will give us a cheer when they see us on the Trail and fingers crossed we can beat the time!”

Speaking about the challenge, full-time GP Nia Albiston commented: “I love being out in the wild and exploring the outdoors. Running is my way to get outside and get active so this challenge is perfect! I’ve run a couple of ultra marathons but most of my competitive running has been in fell races. This challenge will be my first ever multi-day ultra run so I’m a little nervous but mostly excited. It’s a confidence boost to get the backing of a Welsh brand like Wild Trail and hopefully our run will help raise awareness and funds for the Wales Air Ambulance which is such an important charity. Wish us luck!”

Reflecting on the journey that led him to join the challenge, Gordon Hughes said: “When I was 32 I quit smoking. I’d been smoking for half my life and couldn’t walk up stairs without being out of breath. Five months later, I did the Three Peaks Challenge in 22 hours 30 minutes and entered my first running race three weeks later. I’ve done a few ultra races including the 200-mile Race Across Britain and 214-mile Race Across Scotland. I’m excited for this challenge. We’ve been training ahead of the challenge and we’ll need to keep our energy levels up, so it’s great to have the support of Wild Trail as we’ll definitely need their snack bars to keep us going. I’m really pleased that we’re able to raise funds and visibility for the Wales Air Ambulance as part of the challenge and we’re excited to hit the Trail and see how far we can push ourselves.”

Wild Trail Brand Manager, Jim Williams, added: “We make our snack bars to energise people to get outdoors, get active and explore their own wild trails, and that’s exactly what this team of runners is doing. As a proud Welsh brand, we’re delighted that the team is using the challenge to raise money for the Wales Air Ambulance charity. We have an office in Monmouth so we’ll be cheering them on their way past and fingers crossed we’ll be able to celebrate as they reach the finish point and beat the fastest known time!”

For more information of the team’s challenge visit https://www.facebook.com/offasdykechallenge/
For information on Wales Air Ambulance visit www.walesairambulance.com
For details on Wild Trail visit www.wildtrail.co.uk or @wildtrailsnacks on Facebook, Twitter or Instagram.