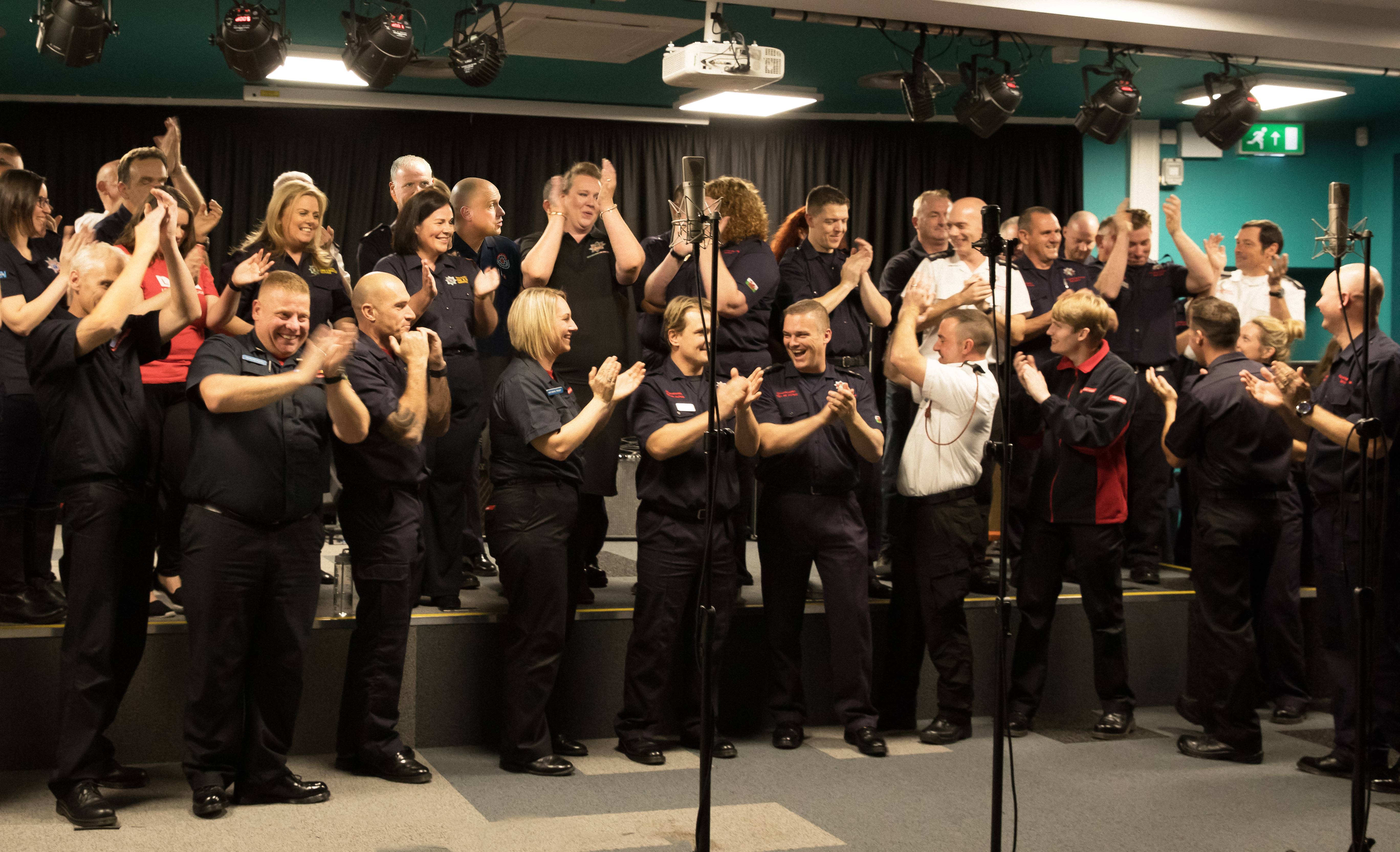 Firefighters from the Mid and West Wales Fire and Rescue Service are aiming to achieve the Christmas number one spot with a charity single produced in partnership with fire service personnel from across the country. The group, known as Fire Tones, joined with stars from TV’s The X Factor and The Voice to record their version of Band Aid’s Do they know it’s Christmas? earlier this month. This is one of the first times that anyone has been granted permission to record this track which will raise money for the Firefighters Charity and the Band Aid Charity Trust.

“What started as a conversation in a Welshpool bar around this time last year has been nothing short of remarkable,” commented Welshpool firefighter and organiser Chris Birdsell-Jones. “Our efforts have really gained momentum and we are grateful for all the support and advice received from the many people to get this project off the ground.  Whilst it would be great to win the number one spot on the Christmas single charts, the money raised for charity and the impact that this will have will mean even more to everyone that participated.”

With the necessary permissions in place the group widened their search for talent from within the fire service to contribute to the single. Stevie McCrorie, a past winner of The Voice agreed to take part along with Andy Quinn, the star of BBC’s Michael McIntyre’s Big Show and a firefighter with Nottinghamshire Fire and Rescue Service. They were also joined by The X Factor contestants Marc Higgins, from Southampton and Richard Ryan, an on-call firefighter from Worcestershire.

Anthony Greaves from BIMM Music College in Birmingham donated session time and firefighters from across the country converged at the newly built recording studio for a hectic 12-hour recording session, masterminded by producer Steve Osborne and expert vocal arranger Louise Warren. With more than 40 fire service personnel involved, it was necessary to use a larger stage to record the chorus parts, where White Dot Media filmed the final recording session.

Further invaluable support has been provided by Oswestry-based entrepreneur Mike Harris through The News Saints FC the champions of the Welsh Premier League, and VCW Security which is one of the UK’s leading distributors of IT security solutions. “I jumped at the opportunity to support the local Welshpool firefighters and was pleased to be able to provide funding for the production of the collectable CDs. We will also be assisting with selling the CDs at The Venue at Park Hall, the home ground of The New Saints FC,” added Harris.

The New Saints FC Foundation Ltd is the official charity of the football club and provides fun, safe and enjoyable sports and activities for people of all ages and abilities across North-West Shropshire and beyond in partnership with various organisations, including the Fire and Rescue Service.

The release of Do they know it’s Christmas? by Fire Tones takes place on the 30th November when it will be available as a download from iTunes, Spotify and Amazon Music. The single will also be available from Amazon Music and HMV as a collectable CD which will also be sold by firefighters outside Tesco stores and at other events to further increase the amount of money generated for the two charities.