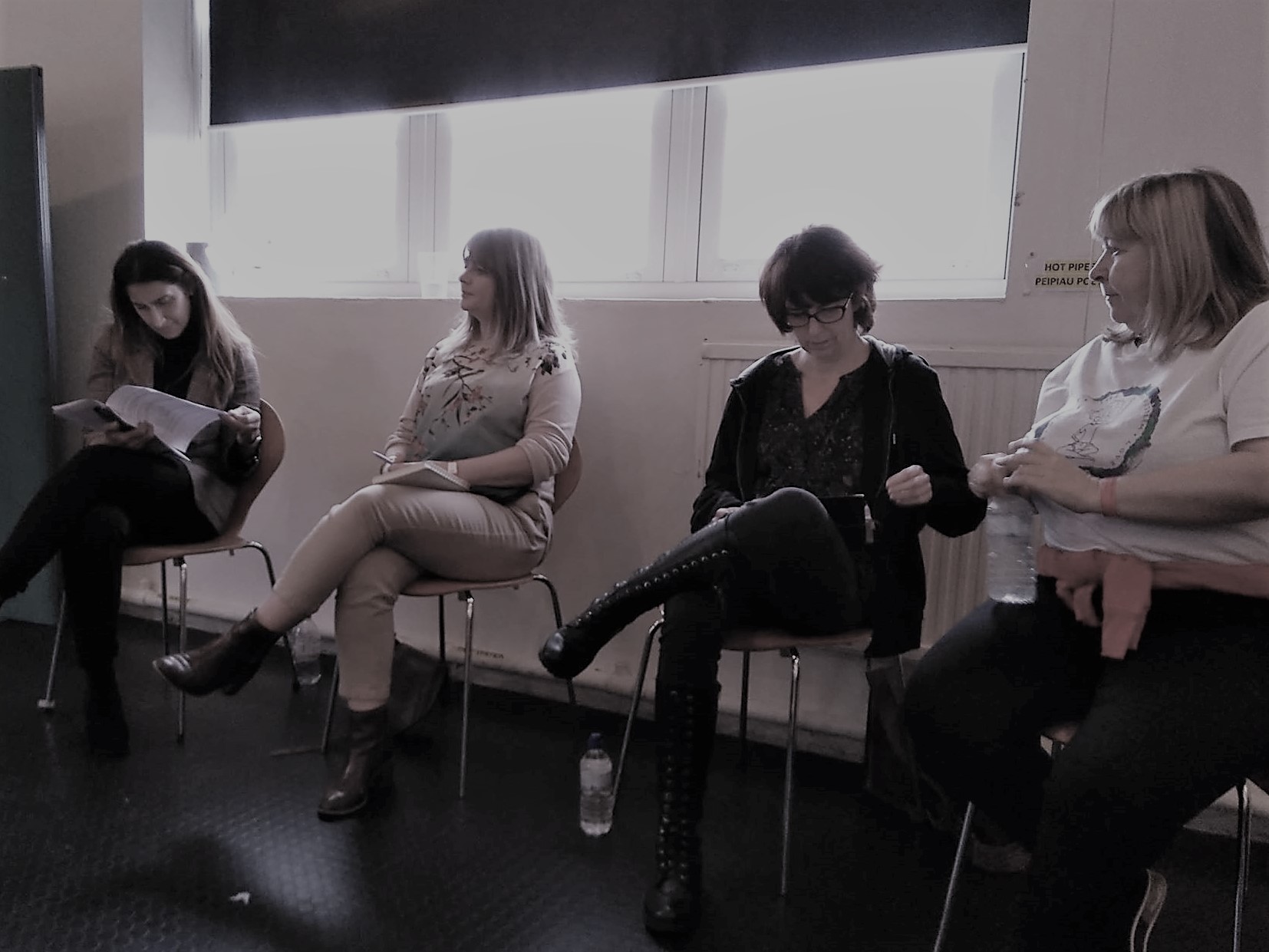 I read the words on the WOW programme and straight away I know it’s a serious topic. I figure it will be heavy and interesting, and I also think it will be separate from me, my life, and my experiences.

I am in a state of naivety about this talk, not knowing it will be one of the most important discussions of this weekend, and, potentially, of my life.

The members of the panel include Yasmin Khan, the national advisor for Violence Against Women, Eleri Butler, CEO of Welsh Women’s Aid, Sam Clutton, assistant director of policy at Barnardos and policy officer for the Welsh Government, and Fiona Broadfoot.

Fiona Broadfoot has been campaigning for 20 years for victims of the sex trade to be cleared of their convictions when looking for work. She’s also the founder and CEO of the Build a Girl Project.

Fiona is happy for me to take pictures for social media but tells me: “I don’t want my picture associated with any ‘sex worker’ terminology.”

“It’s not sex, and it’s not work, and I don’t support the use of that phrase.”

I can tell there’s a certain level of distrust; this isn’t surprising.

Fiona’s story has been used, abused and ignored. People have made money off of her story and used it to propel their own careers, and others have simply reframed it to fit their own comfortable narrative of what life is like.

Why would she trust me, or anyone else?

But she does have trust left because here she is, telling her story- telling her life. She’s putting it all out there, honest and clear. She holds back no punches because she’s tired.

What follows are Fiona’s words, with as little input from myself as possible:

“My introduction to the violent world of exploitation and prostitution began at the age of 15 when I was trafficked from my home town of Bradford to London.

“I was put on the streets and given condoms and introduced to a world that was so far removed from my 15 year old self.

“From the moment I was bought I disassociated from myself. I became a piece of meat. I was systematically bought by 10-15 men a day.

“I was beaten severely by the man who profited from me. It’s not like Pretty Woman, it’s not 50/50 pimps getting half the money.

“You’re treated worse than an animal and I slept on a dirty mattress.”

Her voice starts to break but she doesn’t stop.

“I was criminalised. I was locked in a unit. I was given scabies cream and a physical examination [by the police] to see if i had any diseases.

“I kicked the nurse because I couldn’t not kick the nurse. That was my reaction. I’d been severely abused and I was labelled as a violent young woman and separated from my peers.

“Interestingly, the night I was arrested after I’d been missing from home for 18 months, my perpetrator stood with me. He was in his thirties. I was 16 and a half. They [the police] used first name terms with him.

“They took me to the police station and charged me with being a common prostitute.

“I came out and sought refuge in the Women’s Aid, but I couldn’t talk about prostitution and exploitation because they would not have given me a safe space, because we are Othered.

“Let me tell you something, at the tender age of 18 I wasn’t a ‘sex worker.’ It’s not sex, and it’s not work for the vast majority of us.

“The voice you hear on these topics are privileged women. They’re not from poor working women or women of colour. We’re silenced, we’re invisible.

“I tried to go to college, but because of my criminal record I was forced back into prostitution.

“I scrubbed myself with dettol every night and a scourer. I felt so filthy.

“The men who bought me are still invisible, because they’re entitled, because of that thing attached to them that they can’t control – supposedly.

“Excuse my language here, this isn’t pretty stuff. I can’t talk about it in professional terms, I’m sorry, because while we’re sat here women are being murdered and raped and beaten for that two second orgasm.

“At the age of 26 when I felt so shut down and so disgusting and inhuman, I was watching the news and my cousin’s face came on the screen. I knew she was on heroin, I knew she was. She’d been groomed at 14 years of age with heroin.

“My cousin was murdered by a sex buyer.

“I didn’t used to cry when I told my story. I’ve been talking 22 years about my experiences and I don’t make excuses for being angry and upset about it.

“I’m actually now living as a human, as a full human. I turned 50 last week and it’s taken me nearly all my life to feel like a decent human being.

“I’m here to hold these men accountable. I’m sick to death of us talking about victims, strategy after strategy, throwing money at it.

“We need to stop this rape culture. We need to protect vulnerable women and young boys and men.

“Women are sexualised and pornified at such a young age and it’s just disgraceful.

“I have a son, he’s 21, and that weapon of mass destruction between his legs, I tell you what – he knows he’s accountable and he never would [harm anyone]. He’s a beautiful young man.

“I nearly got him taken away from me when he was born because I wasn’t considered a good mum.

“The men who bought me have got children at home.

“They wanted me to shave my pubes and put a school uniform on… but they’re safe with their kids?

“I’ve lived with a criminal record that is eight pages, double sided, that describes me as a common prostitute.

“I held the state accountable in January. I won the case, but now I’m in an appeal. They want an appeal!

“I’m going to organise a national walk. I want all women and men to walk with me.

“The term sex work should not be used. Listen to survivors. We are the silenced ones, we are not privileged white women.

“I’ve had it. I’ve absolutely had it.

“I do apologise, but I can’t talk about it in a tidy way anymore.”

When Fiona finishes speaking the atmosphere in the room is hard to explain. There are no words to describe or explain the impact and the emotional weight her words have left in the space around us.

We clap and I manage a feeble “thank you for your words.”

Something has been stirred in each and every one of us today, and it’s bigger than words and bigger than us.

We want to do something.

Fiona is CEO  and founder of the Build a Girl Project, working with young survivors and encouraging them to become mentors for others.

The project aims to provide a safe space for girls and young women and empower them to “make safe and informed choices and healthy relationships.”

She works with children in primary schools to teach prevention and she also has groups within the community.

Resources are scarce and the project relies heavily on the Gofundme page.

Every single penny goes directly to the project.

They’re currently working on a webpage but Fiona is on Twitter: @fiona_broadfoot

One young woman from the project has gone to university. Three generations of her family have never worked, but with help and support from Fiona and the project she’s now at university.

One woman was a selective mute. She wanted to be a cat because the cats in her home were treated better than her. She has since been presented an award with Fiona.

What can be done?

Eleri Butler, CEO of Welsh Women’s Aid, says: “We need to look at how we can disrupt demand for sexual exploitation. Society eroticises violence against women. Why is it still okay in this day and age for our bodies to be bought and sold?”

The panel urges us to listen to the needs of survivors – to value their expert opinion.

Fiona says: “I am the expert of my life. There’s lots of people floating around calling themselves experts. We need to lead the change, we [survivors] have been failed enough.”

The panel all agree that education is key, and encouraging open discussions with both boys and girls can make a massive difference.

Yasmin Khan, the national advisor for Violence Against Women, says: “We need to work much more closely together to make change happen.”

What I’ve taken away from this is the importance of listening to the right people, to those with first-hand knowledge, and being aware of the projects and organisations out there that we can support. We need to be proactive. Prevention, protection, support.

So for now I mutter a feeble “thank you for your words” to Fiona, but this is the start of change within me, and change within others.

Genuinely and sincerely, thank you.