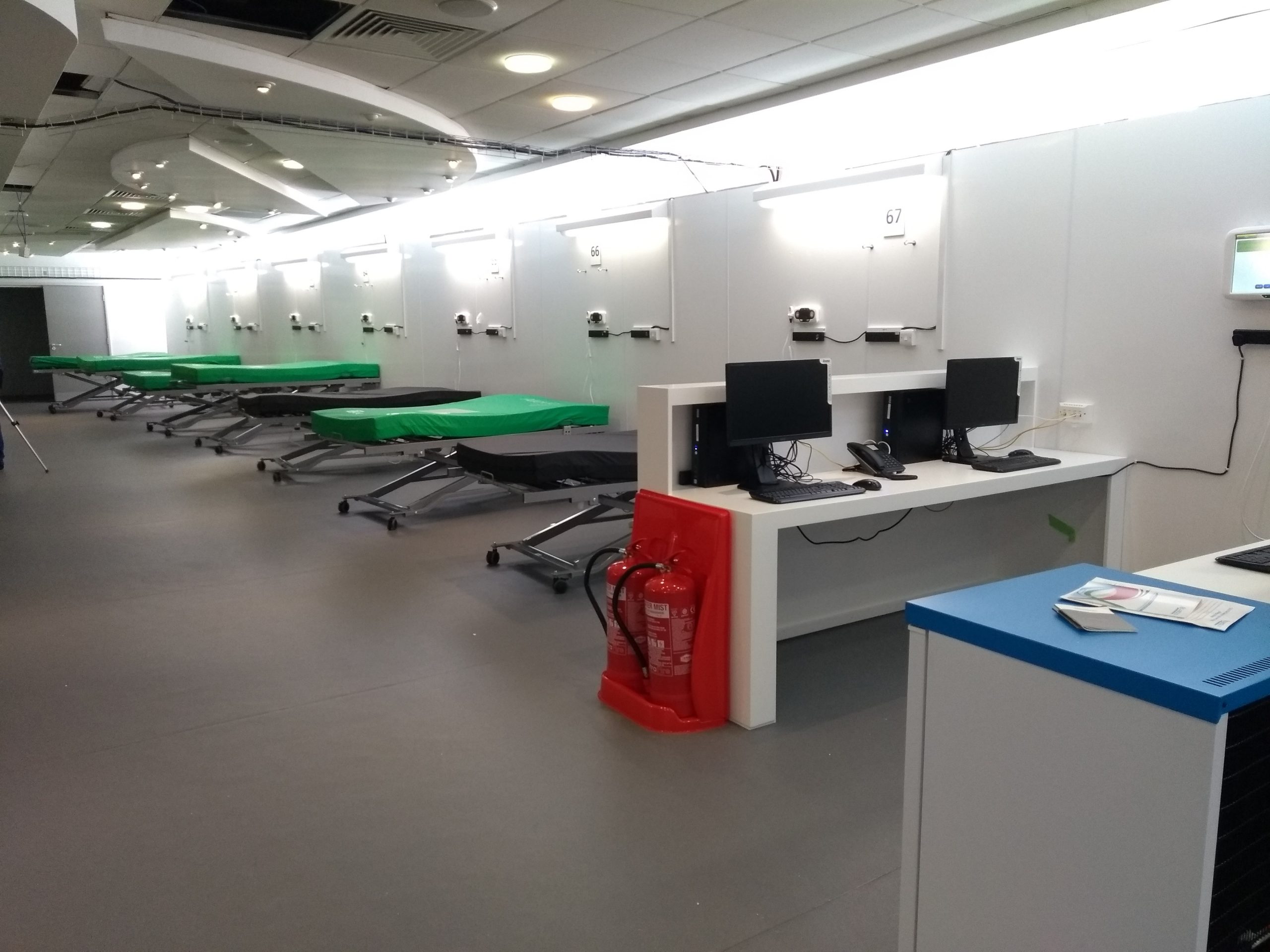 His Royal Highness The Prince of Wales will mark the official opening of the Ysbyty Calon y Ddraig – the Dragon’s Heart Hospital, the temporary hospital based at the Principality Stadium on Monday 20 April 2020.

Ysbyty Calon Y Ddraig is the largest temporary hospital in Wales and the second largest in the UK. It has been funded by Welsh Government to support the communities of Cardiff and the Vale of Glamorgan and potentially across other Health Boards in Wales.

The official opening of Ysbyty Calon y Ddraig – the Dragon’s Heart Hospital, set in the backdrop of the stands at the Principality Stadium, will be hosted by Welsh rugby star Dr Jamie Roberts.  Key speakers include Professor Charles Janczewski, Chair of Cardiff and Vale University Health Board (CAVUHB), Dr Jonathon Gray, Executive Director of Transformation and Director of Ysbyty Calon Y Ddraig, Vaughan Gething, Minister for Health and Social Services, a video address from First Minister, Mark Drakeford.  The event will close with a pre-recorded video address from His Royal Highness, The Prince of Wales.  A plaque will be unveiled by Ruth Walker MBE, Executive Director of Nursing at CAVUHB and Victoria Legrys, Programme Director for Ysbyty Calon y Ddraig.  Musical accompaniment will be provided by Alis Huws, official harpist to His Royal Highness The Prince of Wales.

In light of the evolving COVID-19 pandemic, and the rising number of confirmed cases testing positive for Covid-19, Cardiff and Vale University Health Board identified that additional bed space would be needed to accommodate patients in the Cardiff and Vale area.

In a collaborative effort with support from the Welsh Rugby Union, Cardiff Council and Cardiff Blues, the Principality Stadium, surrounding areas were identified as suitable venues to accommodate the anticipated increase in demand, and Ysbyty Calon y Ddraig – the Dragon’s Heart Hospital was born.

Cardiff and Vale University Health Board Chief Executive Len Richards said: “The Principality Stadium embodies the heart and soul of the nation. I’d like to thank the Welsh Rugby Union, Cardiff Council, Cardiff Blues and partners for their commitment to the Ysbyty Calon y Ddraig Hospital.

“The Health Board has never undertaken a project this big before and in such a short space of time.  We are planning on the basis of what we think we might need to ensure we are as ready as we can be.  I sincerely hope we don’t need to use all of the capacity but it is far better to have developed plans based upon the scientific evidence and modelling of the experts.

“This facility will allow us to free up capacity at our other hospital sites so that we can continue to provide services to patients with other health conditions.

“I’d like thank everyone from the Health Board who has put themselves forward to be involved in this project – the commitment and dedication shown by everyone has been truly remarkable.”

Minister for Health and Social Services, Vaughan Gething, said: “The sheer scale of effort that has gone into creating this incredible field hospital here in the heart of our capital city is nothing short of astonishing. This effort is being replicated across Wales, with capacity increasing from 10,000 beds to 17,000 in a matter of weeks. By ramping up the number of beds available in settings such as this, we can make sure there is capacity in our hospitals to care for those most in need during these extraordinary times.”

Mark Williams, Stadium Manager said: “To witness the transformation of the stadium into a field hospital in just a matter of weeks is staggering.  It reaffirms what is possible when people come together.

“I’m immensely proud of my team for taking on this unprecedented challenge with such professionalism.  We frequently transform the stadium from sports arena to music venue and back again and have seen some of the world’s biggest bands perform here, from the likes of Coldplay to the Rolling Stones, but nothing has ever been done on this scale and at this speed.

“I know I speak for all of my team when I say we feel privileged to be able to offer the stadium to Cardiff & Vale University Health Board and the people of Wales at this time and we will continue to work alongside the National Health Service in the fight against Covid-19.”

Ciaran Willcocks, Mott MacDonald’s Project Director said: “We are honoured to be able to support the NHS by leading the design, management and delivery of this amazing build. It has been a tremendous effort by all involved, to make the first 300 beds available in just 10 days is quite amazing and we’re continuing to do our utmost to make the other beds available as soon as possible.”

Cardiff Blues Chief Executive, Richard Holland said: “As soon as we were made aware of the plans to turn the Principality Stadium into a hospital, we offered the entire Arms Park site to assist with the project.

“Our operations team have been working tirelessly with colleagues at the WRU, Principality Stadium and the local health board and the Arms Park has now been transformed.

“The site will initially act as a logistical base during the construction phase of the hospital and once completed we will have welfare, catering and other facilities available to assist the brilliant NHS staff.

“These are uncertain and unprecedented times but we are proud to be able to support the NHS by making our facilities available.”

Ysbyty Calon y Ddraig will soon be welcoming its first patients, and will be a “step-up and step down” hospital with patients who are coming to the end of their treatment of the virus and require rehabilitation and support as part of their recovery and sadly for some, end of life palliative care.

On-site facilities include mobile x-ray, CT scanners, a pharmacy and an end-of-life pathway of care for people in the last weeks or days of their life.  In the adjacent Cardiff Blues Stadium there will be a Staff Haven rest area and a reception area for relatives.

During the past few weeks, over 650 people have been employed to either work at Ysbyty Calon Y Ddraig or backfill posts at the University Hospital of Wales, replacing those staff who are relocating alongside hundreds of local volunteers. 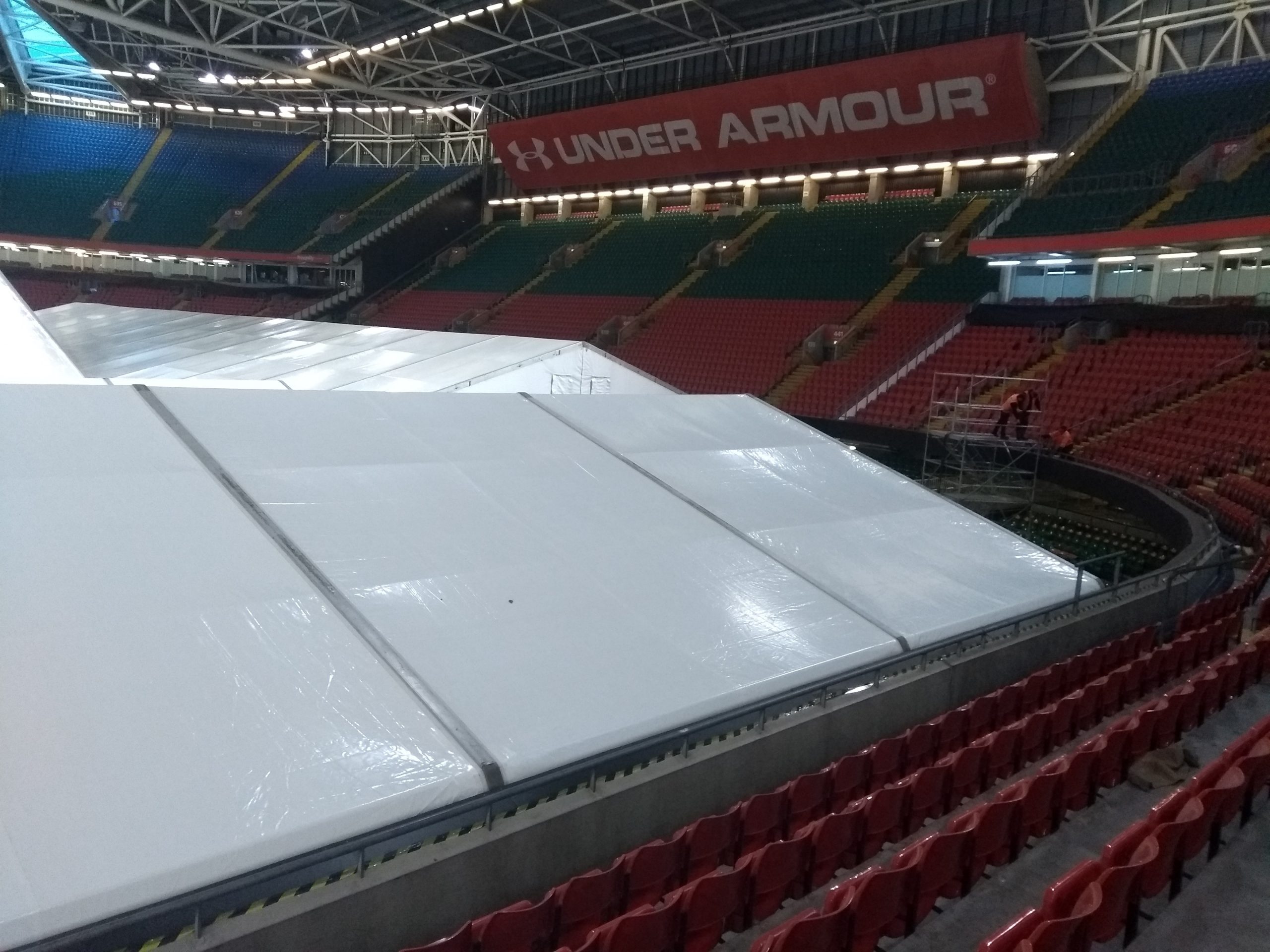