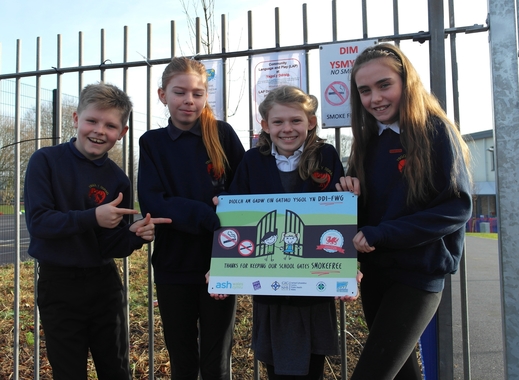 Cardiff and Vale UHB is thrilled to announce that Ysgol y Ddraig in Llantwit Major will be the eighth school in the Vale of Glamorgan to achieve a National Quality Award.

Years of hard work have paid off today as the staff and pupils of Ysgol y Ddraig were presented with the prestigious Welsh Network of Healthy School Schemes’ National Quality Award (NQA).

Rebecca Cadman, the school’s acting head teacher was delighted with the national recognition of her school’s hard work, saying: “The NQA is a testament to our children and the effort of our team. We’re so proud of this whole school approach and feel that it demonstrates the school’s priorities of health and wellbeing for all our children.”

The school is part of the Vale of Glamorgan Healthy Schools Scheme, which is now in its seventeenth year, and has worked tirelessly to achieve the highest level of recognition within it.

When schools join the scheme, they pledge to address seven different health topics:

By doing so, a school must progress through 5 different phases before applying for the award. In Phases 1-3 a school is required to plan and implement three specific health actions over the course of one academic year. In Phases 4-5 a school is required to work towards achieving a whole school approach to one of the Healthy Schools topic areas over the course of two academic years.

Following this, the NQA is awarded to schools that can demonstrate a whole school approach to all areas of health listed within the Healthy Schools Scheme. This requires a school to collate evidence for each of the indicators listed in the NQA documentation.

The NQA is a prestigious award for any school to achieve, and is assessed by national assessors. To date, seven schools in the Vale have achieved this award; Barry Island Primary, Cadoxton Primary, Gladstone Primary, Llangan Primary, Jenner Park Primary, Cogan Nursery School and Llantwit Major Comprehensive school.

The In-School Healthy Schools Coordinator at Ysgol y Ddraig, Karen Bale, was also recognised for the time and effort she has put into the school’s achievement of the award. She said, “I’m so proud of the children and especially the pupil voice groups like the pupil school council and the Eco Committee for helping us to make the school the healthiest and best it can be.” 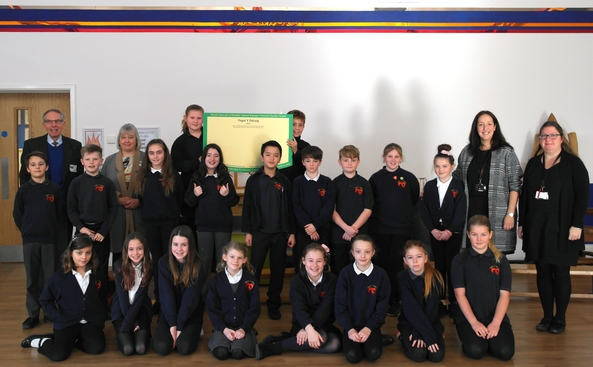 The award was presented to the pupil school council along with Ysgol y Ddraig’s head boy and head girl. Upon receipt, they gave a presentation on the work that they put into the award, including promoting active travel, litter picking and reducing waste, establishing a food and fitness group, designing no smoking posters, conducting a survey on school meal options, running a fair-trade fortnight in the school, increasing awareness of children’s rights in school, and even reading and discussing Welsh Government consultation documents!

The pupil voice in Ysgol y Ddraig is so strong that when Eagleswell Primary and Llanilltud Fawr Primary were amalgamated into the new school, the pupils contributed to the design of the new school name, motto, school badge, uniform and building.  This is something that seriously impressed the NQA assessors, who visited the school last November, and was mentioned explicitly in their highlights of the school.

In fact, the pupils of Ysgol y Ddraig are so committed to being a healthy school that they’re not resting on their laurels. The same day as the school received the award, they put up a plaque from Public Health Wales and ASH Wales, to clearly communicate to the whole school community that their smoke free policy, including the use of e-cigarettes, is extended to their school gates.

Chris Farr, the Co-ordinator for Vale of Glamorgan Healthy Schools says, “It was a privilege to be able to support the presentation of the National Quality Award plaque to Ysgol Y Ddraig. The school is totally committed to continuing to develop a health promoting ethos and provides an outstanding environment for its pupils, staff and wider community. Well done to everyone!”